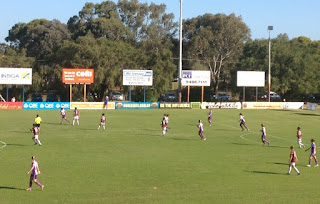 Perth Glory is back on top of the Westfield W-League after a convincing 3-0 win at home to Western Sydney Wanderers today.

Marianna Tabain, Kate Gill and Collette McCallum all found the net as Jamie Harnwell’s side exacted revenge for the 2-0 defeat when the two sides met at Wanderers Oval last month.

The home side were always comfortable having started brightly and, after Kate Gill had fired a warning shot over the bar, they went in front after 18 minutes.

Marianna Tabain cut in from the left and put in a low cross meant for Gill, however it eluded everybody and ended up in the bottom corner of the net.

It should have been two minutes later when Gill was left loose six yards out but she smashed the crossbar with a ferocious volley when it was easier to score.

The Matildas striker made amends on 26 minutes though when she tapped home a pass from Rosie Sutton who had been played through by a superb ball from Collette McCallum.

It looked like the floodgates could open, but Glory took their foot off the pedal a little as Gill missed two more excellent chances to add to the tally.

At the other end, Wanderers captain Sarah Walsh headed over from Catherine Cannuli’s cross and Louise Fors shot straight at Carly Telford right on half time.

Wanderers suffered a blow when they lost goalkeeper Thora Helgadottir at half time as she succumbed to an injury sustained just before the interval, and she was replaced by Elizabeth Durack.

Tabain came close to grabbing Glory’s third almost straight from the restart but shot over after great play from Lisa De Vanna.

Just as the visitors looked to be finding their feet they fell further behind on the hour when McCallum curled home a delightful free kick from 25 yards with Durack rooted to the spot.

McCallum and Aivi Luik were excellent in the middle of the park throughout, getting on the ball at every opportunity and feeding the lively front two of Gill and De Vanna.

Three could have become four on 70 minutes when Gill played Tabain through on goal but Durack did well to parry the shot over.

With the game over as a contest, Perth sat back and played out the remainder untroubled to ensure a clean sheet.

They now move two points clear of Sydney FC at the top of the ladder with a game in hand to come against Canberra United.

Amy Jackson marked her record-breaking appearance for Melbourne Victory with a 1-1 draw against Canberra United. This match marked the 67th time the midfielder lined...
Read more

Melbourne Victory recorded their biggest ever loss with a 6-0 defeat to Melbourne City at Marvel Stadium. The derby commenced with City taking control of...
Read more