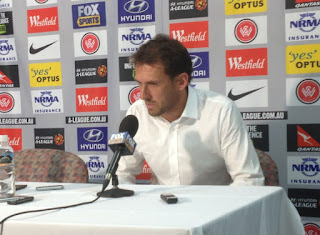 In the words of Liverpool legend Bill Shankly, “Football is a simple game, complicated by idiots”, and the Western Sydney Wanderers used the basic principles of defending to inflict only the second home defeat this calendar year on Perth Glory.

When Youssouf Hersi was sent off on 38 minutes, it was clear to everybody watching how the remainder of the game was going to pan out – Glory would enjoy most of the possession and create more chances, but could they convert that dominance into goals?

The answer was no as a combination of good organisation, strong discipline and top drawer goal keeping preserved a clean sheet and, ultimately, three points.

“It shows a lot, it shows the character we have,” said boss Tony Popovic afterwards.

“Coming here is very difficult and they (Glory) have shown that with the great home record that they have.”

“It would have been an injustice if we didn’t get the points in the end.”

If you haven’t seen the film ‘Mike Bassett: England Manager’ then shame on you, sort yourself out.

If you have, however, you will be familiar with the press conference scene where an under fire Bassett tells all and sundry in no uncertain terms that England will be playing “4-4-fucking-2”.

Popovic adopted a similar straight forward mindset after half time, though with only ten players on the park his 4-4-1 variation saw Dino Kresinger playing up front on his own in what was a thankless role.

The half time introduction of Shannon Cole for Jason Trifiro gave them good defensive cover on the right hand side, an area that had been exploited by the overlapping Scott Jamieson.

In the middle of the park, Aaron Mooy showed that he has more to his game than just flair on the ball as he put in an excellent shift alongside goalscorer Iacopo La Rocca.

The return of captain Michael Beauchamp after illness was a huge boost and his partnership with Nikolai Topor-Stanley was solid, even if they did defend a little too deeply inside their own penalty area at times.

When Glory did get a sight of goal, veteran shot stopped Ante Covic was on hand to deny them with a string of fine saves, though he did have his woodwork to thank on two occasions.

Popovic was understandably delighted with his team’s efforts to hold on for over an hour with a man less, and spoke about the character, discipline and unity on show from his players.

“There was a real togetherness out there today; it’s something that we’ve seen in every match but today was a great test,” he said.

“It’s hard to judge the performance differently to the others because every performance we’ve had has been a good performance so far this year. We haven’t gotten the results we deserved.”

However he wouldn’t be drawn on what his hopes and expectations are for the remainder of the campaign following their strong start.

“We’re on a steady curve in the right direction and that’s what pleases us.”

The A-League transfer window has barely opened and already Perth Glory have made a significant move, with Dutchman Guyon Fernandez dumped in favour of...
Read more
Love your football?
Subscribe to our weekly football wrap. During the season we'll send you all the week's football action straight to your inbox.