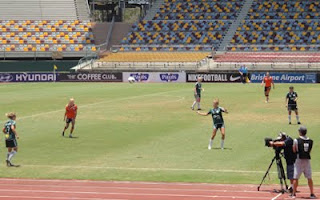 Brisbane Roar have secured their second W-League premiership, underlining their position as W-League title favourites following a resounding 5-1 defeat of Canberra United at Queensland Sports and Athletics Centre on Saturday.

Tameka Butt stole the show in her 50th appearance for the newly crowned premiers, proving near unstoppable as she netted a hat-trick – taking her personal tally to eight goals from the previous five fixtures.

The trio demonstrated Brisbane’s attack-focused approach from the outset – earning a corner inside the opening minute – however it was midfielder Katrina Gorry who opened accounts in the 11th minute courtesy of an error from Canberra goalkeeper Mackenzie Arnold.

Gorry outmuscled Canberra right-back Georgia Yeoman-Dale to take possession of a lobbed through-ball, before turning sharply and firing a low cross that snuck under the otherwise well-positioned Arnold at the near post – the ball trickling tauntingly into the back across the goal line ahead of the scrambling defenders.

Butt netted her first from the penalty spot on 38 minutes. Vedrana Popovic teasing the United defenders with a mazy run, before slipping the ball to Butt, who was clattered from behind by Nicole Sykes’ desperate tackle, earning the penalty decision.

Two minutes later, Popovic had the ball on a string again – this time playing the ball for Gorry, who picked out Butt’s surging run toward the far post; Butt demonstrating sublime technique to steer the ball home on the volley at full speed.

With the result and premiership effectively sealed for the hosts, Canberra attempted a revival just before half-time – Kaitlin Munoz and Michelle Hayman unleashing shots from outside the area, both well held by Roar custodian Kate Stewart.

The visitor’s late half surge payed off though when American import Kristen Mewis rose well and headed strongly to turn the ball in from Ariane Hingst’s corner kick in the final minute of time added on.

However, Roar were not to be denied – their determination ably demonstrated as they carved up Canberra’s defence from the restart; the assistant referee somewhat controversially flagging Butt offside from the final pass to the disappointment of the parochial Brisbane crowd.

Brisbane’s passing combinations continued to leave last season’s champions chasing shadows under a directly overhead sun, but the hosts didn’t restore their three goal margin until the 64th minute when Gielnik was played in behind Canberra’s line by Chapman’s well-weighted pass.

The imposing striker then took a touch to round the advancing Arnold, before passing the ball into the back of an empty goal. With the result sealed, Butt put the finishing touches to an outstanding afternoon when she rounded out her hat-trick with twenty minutes remaining – surging toward the far post, as for her second, to put the finishing touches to Gielnik’s firmly struck low-cross.

Canberra were spared further blushes in the final minutes as Brisbane spurned a host of opportunities to extend their lead even further – the fresh legs of attacking substitutes Hannah Beard and Tatsuoka testing Arnold to the last.

The premiership is Brisbane Roar’s second in the competition’s five year history. The club has also appeared in all four previous grand finals – twice being crowned champions.