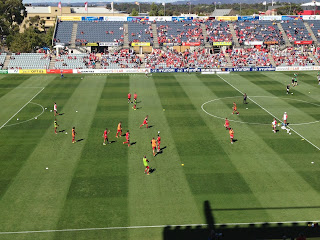 Western Sydney’s mission to ‘be the very best, like no one ever was’ appears on track after an emphatic 4-2 win over Adelaide United. For the teams outside the top four, ‘to catch them is their test’, but it won’t be easy with the Wanderers in ominous form.

WHAT THE COACHES SAID

The A-League’s new boys have strung together a run of four wins from their past five games to put the Victory and Mariners on notice.

The match started slowly and it took until the 23rd minute before any action to excite the crowd arrived when a Wild chance appeared.

Hersi made up for his error in the 43rd minute when he gave Western Sydney the lead after a goalmouth scramble in the United’s penalty area. The Reds Hurt Themselves in their Confusion as they failed to clear, giving midfielder Aaron Mooy two bites of the cherry before Hersi slid the ball home.

Western Sydney doubled their lead just before the break as Hersi played the Master Ball to an unmarked Bridge, firing the ball into the roof of the net.

United fell further behind in the 52nd minute as a Swift attack from the Wanderers opened up an easy chance for Hersi to finish at the back post and complete his brace. Ono put the ball through to Bridge whose cross evaded everyone except the Flying Dutchman who headed home with ease.

Adelaide pulled a goal back through substitute Bruce Djite in the 61st minute as his left-footed Thunderbolt shocked the high-flying Covic into Submission. United’s comeback was short-lived however as Mateo Poljak got in on the action, capitalising to fire low and Take Down any hope of a Reds revival.

Winger Iain Ramsay’s last gasp effort in the 87th minute gave the scoreline a more respectable look than their previous 6-1 hammering at Parramatta Stadium, however the damage had been done, forcing Valkanis to Fly his side to the nearest PokèCentre.