Doom and gloom aplenty in Adelaide 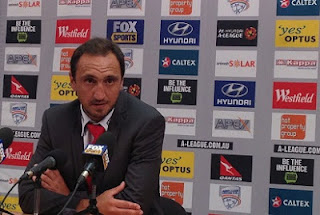 Adelaide United coach Michael Valkanis has urged his side to turn their mindset around ahead of a crucial grudge match against Melbourne Victory this Friday night.

The Reds were battered 4-2 by the Western Sydney Wanderers at Hindmarsh Stadium in the wake of John Kosmina’s shock resignation from his home-town club.

Valkanis says United need to eliminate the negativity that has plagued the club in recent weeks.

“We have to keep pushing forward and be in a positive frame of mind,” Valkanis said.

“We need to rally together and be united. We need to lift our heads up and move forward. We’ve got another eight games [before finals].

“There’s enough doom and gloom this week with what’s gone on in the background. Okay we lost the game. We lost the battle, not the war,” he said.

The caretaker coach said his side still have plenty to fight for and they will face a tough task this Friday as they host fierce rivals Melbourne Victory who are in red-hot form, heading for the close of the regular season.

In stark contrast, Wanderers coach Tony Popovic was thrilled with his side that has pulled a game ahead of the Reds and won their last four games on the trot.

“We are a close-knit group, a club that has high aspirations – we want to be the best,” Popovic said.

“Slowly we are taking steps forward. I don’t see it as anything special, it’s just the way the Wanderers work.

“And we as a club are very happy with how we play our football, how we conduct ourselves, and moving forward there is a lot more room for improvement on and off the park.

“Now we have shown a great consistency in our results – four straight wins, any team that could achieve that would be pleased,” he said.

While Western Sydney have strung four wins in a row the Reds have put four losses together in as many games to slip beneath the Wanderers on the table.

Despite the loss, Valkanis found positives to take from the game including the return of Jon McKain and his side’s effort when behind.

“If there’s a positive it was the reaction of boys. They never stopped, they kept trying and we pulled two goals back,” Valkanis said.

“He [McKain] was very good today. There are only eight games to go but he becomes a very important player.

“That is a positive that he got to play 60 minutes after a long time being out of the game,” he said.