Although the behaviour of A-League fans has gained extra time on major news bulletins and in newspapers over the past week, the entire competition’s supporter base has committed arguably the worst act of football indecency ever over the course of round 13.

Major news outlets such as the Herald Sun and Channel 9 have focused heavily on the bad behaviour of Melbourne Victory and Western Sydney Wanderers fans after the two teams’ supporters clashed in a deadly round 12 street brawl, resulting in the deaths of 41, decapitation of several hundred, kidnapping of numerous family pets and the theft of a small group of heavily religious orphans’ innocence amongst other horrible things. 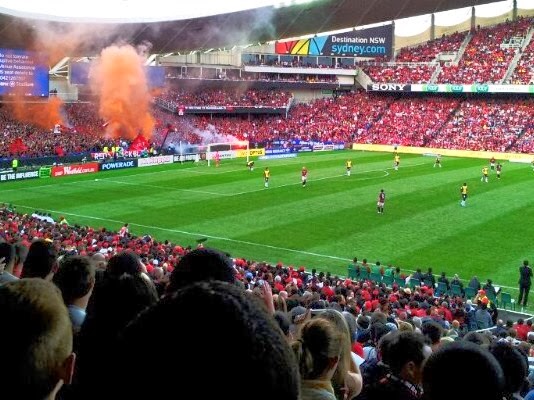 With this heinous act in mind, the latest horror that A-League fans have collectively subjected the innocent general public and dwindling journalists to is even more inexcusable and frankly not going to be tolerated.

The incident that plagued round 13’s football in question is, of course, absolutely nothing.

The droves of innocent families that attended games could only look on in horror as fans all across Australia handled themselves in a completely respectable manner, as they have for the vast majority of the season and the competition’s existence. As a direct result, fans have committed their worst crime yet by not providing overzealous A-League-bashing journos with an easy target. Good going, you despicable thugs.

It has been a tough week for these journalists who, having invested heavily on another indiscretion, crossed their fingers for just one tiny bashing, flare or crowd riot. It was not to be.

As a result, the poor dears have had to assume the position and strain to see who can push out the biggest pile of crap to fill in the gaps where the assumed stories on poor crowd behaviour were going to go.

Last Friday, the Herald Sun’s Rebecca Wilson suggested that A-League crowd behaviour could be likened to the Hillsborough disaster in 1989, caused by an ill-minded decision by security that led to overcrowding and the subsequent deaths of 96 Liverpool fans. The reference has since been removed due to Wilson’s apparent inability to operate Google before sending her article to the editor.

Apparently those at the Herald Sun are educated in the ways of the A-League and football, so much so that they feel the need to provide their specialist commentary when something negative happens in the competition, but have no understanding of one of the biggest tragedies in world football. Okely dokely.

After Melbourne Victory’s 3-0 loss at home to Brisbane Roar, which featured no violent crowd activity to the despair of numerous television on-the-spot reporters awaiting what was sure to be a brutal and bloody showing, the Herald Sun was forced to run with a front page story supposedly containing “secret files” on the violent history of Melbourne-based football thuggery, expertly put together by Mark Buttler for its Sunday edition.

The particular incidents highlighted are so “secret” that every detail can be easily found by anyone with an internet connection while one of the events mentioned was taken to court and overturned. Again, Google.

Even on this Tuesday morning, 10 days after the incident involving Victory and Wanderers fans, a notorious Herald Sun columnist named Rita Panahi, who was likely weeping to herself over the attention her co-sensationalist Rebecca Wilson was receiving, put together 911 words suggesting that A-League supporters suffer from an inability to admit their support for violence. Of course, all of us fans naturally adore when the minority act like morons while both condoning and applauding their actions.

The article was then topped off by Panahi stating how inferior the A-League is in relation to the rest of other current sporting competitions, so inferior that the Herald Sun insists on focusing on a negative aspect 10 days after it occurred.

Panahi even posed the question to readers in regards to the pre-game Victory/Wanderers clash: “Can you imagine what a tourist witnessing this spectacle would have thought?” It’s likely the reaction would be similar to that of anyone who has had the displeasure of having to read about the same story over and over again for the past 10 days: a little irritated. We get it Herald Sun, you don’t like sokkah hooligans.

But don’t blame the journalists; it’s the fans of the A-League that are at fault here. If we weren’t so caught up doing what regularly happens throughout the season and spent more time trying to abuse and physically assault each other, which all supporters obviously condone as insinuated by the aforementioned writers, then the lovely Rebecca, Mark and Rita wouldn’t have to trawl back and keep flogging the same dead horse.

Fans need to have a long hard think about their recent good behaviour. If we don’t start becoming consistently unruly and physically violent, the careers of journalists who survive almost solely by producing click-baiting tripe will be in jeopardy.

After all, how are people meant to know that the A-League provides an unsafe environment and is filled to the brim with violence-approving thugs if we don’t supply these sensationalist scribes with material to write fresh negative stories?

It’s time to get your act together, A-League fans. Unless you want to be directly responsible for such talented journalists having to dig elsewhere for a story to drag out, close down your computers, don your most easily-identifiable club outfit and cause some public disturbances. If you won’t, show your support for those that will.

As a football supporter, you know it’s only right to do what comes naturally to you.

0
The Western Sydney Wanderers and Newcastle Jets fought hard for a share of the spoils in an end-to-end 1-1 draw at Bankwest Stadium on...
Read more
Hyundai A-League

0
Melbourne Victory fans are waiting with anticipation for the team announcement that tells them Marco Rojas will be a part of the squads starting...
Read more
Hyundai A-League

0
Melbourne City have overcome a torrid week riddled with injury and suspension to claim their first derby win in more than a year. Last week...
Read more

How Melbourne City have secured the Premiers Plate

Garriock to reflect on time at Canberra

0
In her last game in charge at home, Canberra United head coach Heather Garriock said that it has been an emotional few weeks, and...
Read more