Carle disappointed with draw against Shanghai 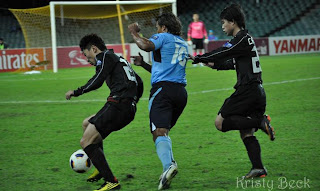 Sydney FC drew one all with sister-club Shanghai Shenhua last night in a heated affair for what was the second game of their AFC Asian Champions League campaign. Sydney marquee Nick Carle spoke with The Football Sack after the game and felt his team should have come away with all three points.

“[I’m] very disappointed we didn’t get the win because I think we played some good football.

“Being at home they’re the games you need to win – we needed to press but we didn’t get it. I thought the way we played we deserved more out of the game. They had a few chances on the counter but apart from that it was all us.”

The Sydney outfit had an overwhelming amount of possession, averaging 62%, and outplayed their opponents in the first half. With only one home game remaining, next week against stiff opposition Kashima Antlers, Sydney will now have to win at least one game away from home to qualify past the group stage.

“I don’t think you can fault anyone it was a good team performance. We were unfortunate not to score that second goal but I thought our performance was very good. It’s always hard when a team sits back like that.”

The two clubs formed a sister-club relationship in 2009 but understandably there was no mention of this bond last night. The game featured six yellow cards and could have been more as the two teams’ differing styles came to loggerheads. While Sydney played some of their most attacking football of the year, Shanghai were happy to settle for an away draw and their attempts to time waste were frustrating for Sydney fans and players alike.

Interim captain Stu Musialik believed his team were not impacted by the Chinese Super League club’s theatrics – which included players stretchered off only to be fit moments after leaving the field.

“It was frustrating but it was important for us to ignore it, switch off what they were doing and make sure we kept switched on and kept pressuring them. If we got caught up in that we would have lost what we were trying to achieve. To our boys’ credit we definitely did that and didn’t get caught up in any garbage”

Nick Carle spoke similarly and assured fans that it did not phase the Sky Blue.

“That’s part of the game we try to stay away from – we try to focus more on how we perform”.

The game was perhaps overshadowed by an appearance in the stands by Roy Keane, former Manchester United player and ex-Ipswich Town and Sunderland manager. Keane however kept tight lipped over speculation he’s in line for the Melbourne Victory head coaching position.

Sydney FC face Kashima Antlers next Wednesday 13th April in a must win match at the Sydney Football Stadium.

What Sydney FC need to change for next season

With the curtains now drawn on a largely underwhelming 2021/22 A-League Men campaign for Sydney FC, it is time to look at how the...

With the 2021-22 A-League Men finals now well and truly underway, here at The Football Sack we like to investigate the teams who missed...