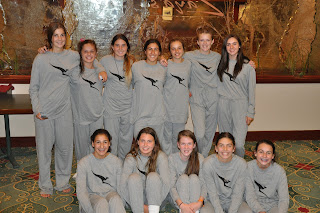 March 29th 2012
Stocky’s Scribbles have returned as Craig Stockdale takes us behind the scenes when one of Australia’s most talented junior teams head to Dallas to take on the world’s best. With reports on matches as well as what happens off the pitch, read all about what it’s like to live the life of a junior elite player in their quest for glory in the United States of America.

Imagine the excitement for 15 young girls heading across to Dallas to participate in one of the world’s most prestigious girls soccer tournaments; the 2012 Dallas International Cup.

Gathering at the airport with luggage in hand and dressed in the full Brighton Soccer Club attire supplied by our major sponsor Nike TSA, the girls say their goodbyes to family members. Tears subside as they pass through the sliding doors to complete the formalities of immigration. Right now football is a distant thought in the minds of these young girls as simply getting to Dallas will consume the entire day and night.

Thanks to Mr. Alan Joyce of Qantas, the girls are chaperoned to the exclusive Qantas Club to enjoy the hospitality that awaits most frequent flyers; discussion revolves around the movies, the food and the all-important seating arrangements on the 747 Jumbo. As we head from Melbourne to Sydney the Customer Service Manager on flight Qf430 welcomes the Brighton Jets soccer team and announces their international debut in challenging the best America and Europe have to offer in Dallas Texas.

Time stands still when you are embarking on a 16 hour flight to the other side of the world. Watching the little Qantas jet cross over the Pacific Ocean, across the International Date Line and out of the darkness of the night is an experience many international sports people endure on a regular basis.

Travel is a necessary evil for those elite sports stars when you are based in Australia and competing on the world stage and the need to stay hydrated and stretching ones legs in the aisles is paramount to fighting exhaustion. The continual drowning noise of the Rolls Royce engines ensures we nod in and out of sleep every hour or two.

Women’s soccer in America is now considered to be the best breeding grounds for future stars internationally. With several of our national Matilda’s playing this season for the Boston Breakers, the college system and talent development programs across America are now providing the launch pad for the professional Women’s Soccer League and its emergence across America. Women’s soccer development here has been extraordinary in the last decade.

The steady growth and compilation of the major components being College soccer, the youth programs, explosive growth in amateur clubs, their successful national team and tournament successes have turned the USA into a world soccer superpower and just as importantly has turned women’s soccer into a mainstream sport in North America.

Arrival at Dallas Fort Worth International Airport is greeted by a massive queue at immigration where the girls have to be screened for fingerprints and facial recognition. Worried looks were replaced with jubilation once we all passed through customs where we are greeted by the host team the Dallas Texans. The big black bus hurtles towards the hotel with the girls transfixed on the spaghetti of concrete roadways and the number of buildings located just off the freeways – in the middle of nowhere.

Read all of Stocky’s Scribbles here.