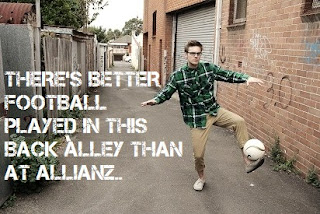 Sydney FC are on an extraordinarily similar track as Melbourne Victory were last year. Disposed of Championship winning manager. Coach promoted from within. Coach failed to deliver. New one comes in ’til end of season which is ultimately a failure.

Sydney fans will be in the ‘Magilton’ phase of this cycle soon enough. There’s even talk of Farina.

The possibility of this alone is reason to stop watching the A-League. No wonder Ian quit. He must have traveled into the future and laid eyes on the future coaching appointment and figured it just wasn’t worth it. You should quit too. Here’s why:

1. Brockie, Smeltz, and to a lesser extent Rojas.

This is the A-League, dammit. Not a chance for New Zealanders to show us how much better they are than us at a game that isn’t rugby. Yeah, you didn’t lose a game at the World Cup. So what? We played in a four goal thriller against Germany. Your nickname is the All-Whites. Come on.
2. Wanderers without Hersi is like a disfunctional parliament without Abbott.
A team shouldn’t rely so heavily on one player to get them across the line each week. This Sydney club shouldn’t be forking out millions on a single European when the rest of the team is.. Sorry I’ve mixed that one up. Forza Youssef Hersi.
3. Security guards at stadiums don’t know who the coaches are.
Gallop is singing the praises of the competition but the men in fluro aren’t listening. A-League coaches still have to wear All-Access passes whilst inside the ground so they don’t get chucked out by an eager work-to-rule unionist with a rugby league agenda.
4. Two nil lead plus six goals yet no result for Heart.
Gary van Egmond was right not to jump ship from the Jets. Whenever I’m in a jacuzzi I never want to leave the jets either. Newcastle is actually one giant spa bath. Everyone inhabits the outskirts whilst noone ventures into the center unless there’s a game. Newcastle Jets: Members only.
5. Central Coast beat Roar 2-1
Sydney FC are reliving Victory’s coaching pain whilst Brissy and the Mariners keep exchanging low-scoring blows (it’s been exactly two years since there was more than two goals scored by either side). We’re living in some sort of timey-wimey time warp and I’m having none of it. Tit-for-tat nonsense.
NOW READ “THE CROSSBAR”, THE WEEKLY LIKES AND DISLIKES FROM THE WEEKEND OF A-LEAGUE.