5 reasons to stop watching the A-League before finals 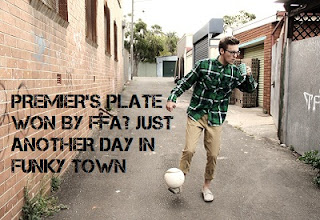 Brisbane Roar have hit the Finals Series running faster than a gun touting South African pleading not guilty. Del “All-Star” Piero will be treated to an early holiday before teaching MUFC a thing or two come July. And McBreen has secured 1.6 contracts with the Mariners, whom we’re assured are financially solvent.

The only blade runner I’m partial to drinks a lot of whiskey and basks in the darkness of film noir.


1. No confetti on your plate
The federation have decided Wanderers will be given the Premier’s Plate at their home ground should they win the league. Which is silly because Hunter Stadium will basically become a home ground this arvo anyway. Eight thousand hooligans are expected. Oh and some Wanderers fans too.

2. Match day programmes no dice
Want to do a little light reading the old fashioned way come match day? Well they’re a rarity at A-League games so you’ll be hard pressed. But in the IGA NPL NSW Mens 1 (yes, that’s a gob full of acronyms) they’re a weekly thing, complied by yours truly. Bring them back.

3. One horse race.
Forget Wanderers, Mariners, Victory and United. Brisbane Roar will be champions again this year. Seriously, it’s getting boring watching these oompa loompa themed so and sos rolling every other team. Three in a row? There’s talk of installing the A-League trophy permanently in the Suncorp Stadium home dressing room. It would make for a very inspiring pre-match dump.

4. New Zealand Snoozealand
They’re fighting to avoid the spoon after a horrid season. No wonder fans in the country don’t visit The Football Sack – they’ve already enough legitimate reasons to stop watching the league, let alone having to read totally-made-up-tongue-firmly-in-cheek ones.

5. Footy’s back don’t ya know?
Why are you still tuning into the A-League when there’s perfectly good Aussie Rules on the telly? They score heaps of goals every other minute and each one is totally as meaningful as goals scored in football. Duh. Support your local code for goodness sake. Aren’t you Australian or something?