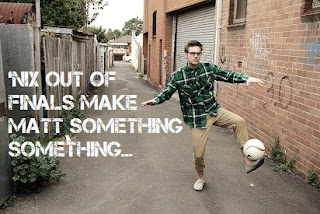 Finals are almost upon us and this week 5 reasons takes a bit of a Finals Series theme. Perhaps I’m annoyed I missed out on tickets to the Sydney Derby. Perhaps I’m angered by A-League fans causing trouble. Or perhaps I’m just stressed until I find out whether bail will be posted.

1. One team can’t possibly make the finals
There’s two weeks remaining and Wellington Phoenix have zero chance of making the finals. Watching their final round of football will be agony knowing it’s a dead rubber and all they’re playing for is to not receive the wooden spoon. Top Eight next season please.

2. Any team can be added to the league and compete
Gone are days when new teams come into the A-League and have to try their hardest to draw games, let alone win them. Western Sydney Wanderers are odds on to receive the Premier’s Plate at the Sydney Derby this week in their first season. What a lark.

3. Lifting the toilet seat is easy
With the rejigged Finals Series format it’s harder to piss into a urinal and not get spatter on your rolled up chinos than win the A-League. I declare we all wear dark coloured clothing, aim for the trophy and go nuts. Could be the new halftime entertainment to replace the crossbar challenge.

4. Masterfoods conspiracy
We’re all thinking it.

5. Not enough Mariners vs Roar
It’s not an A-League season without Central Coast Mariners playing Brisbane Roar six times. With Roar currently outside the six they’re unlikely to meet, but even if they do, it’ll only make for a boring four meetings. Six or nothing.