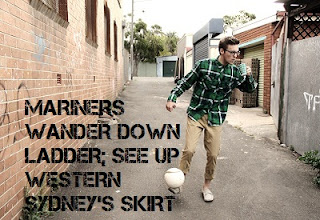 This blog returns as the A-League regains momentum. After all there is no fun in kicking a ball when it’s flat. But with Wanderers on top riding cowgirl into the sunset it’s a fairytale ending with more passion than suburban crime.

1. National Premier Leagues of ordinary gentlemen
State league football is starting up meaning The Football Sack will soon turn into a haven for second tier football. Why not prematurely quit following the A-League for the season and support your local NPL or state league side?

2. Lucas Neill is out
Out for the week, not out of the closet. Although if it was him getting thrown to the ground by a rogue copper the NSW Police would have no choice but to condemn the incident after a whole nation feels hard done by and threaten to riot. He’s the bloody captain of the bloody Socceroos!

3. Forgotten youth policy is making a return
Perth Glory have bolstered their stocks with teenage full-backs Riley Woodcock and Matthew Davies, Newcastle Jets are seemingly fielding their Under-11’s, and who knows what Mulvey or Postecoglou will do next. Give me aging stars and injury risks over youthful pace and exuberance any day of the week.

4. $9.99 six pack at the local
Holy bank balance Batman. For that bargain I’m shouting the whole Sack team beers and we’re hitting the town. Expect slurry match reports and blurry press conference photos. Only joking; we probably won’t even make it to the games.

5. No red vs blue this weekend
This colour battle transcends the A-League. Holden/ Ford, anyone? Who are the laymen going to support if they can’t sit back, flick on the telly and pick one of two colours. Orange vs blue? Red vs red?! The world has gone mental.