Bosnich vs The Football Sack: Round 13

He’s had a few weeks off for Christmas but Mark Bosnich is officially back for 2016.

As always Bozza has picked his team of the week to take on our best eleven of Round 13 of the Hyundai A-League in our Football Manager 2016 simulator series. We’ve pitted him against The Football Sack‘s own team of the week.

Bozza set up in his usual attacking 433 formation while The Football Sack looked to counter that with a five man midfield, using Thomas Broich to support Jamie Maclaren up top. 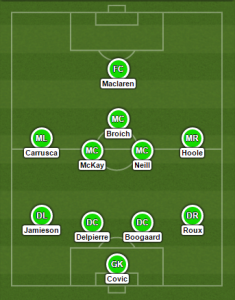 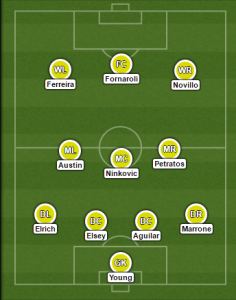 The game that followed was not one for the ages.

It would come down to which team could hold their nerve and convert one of the few chances that fell their way.

Each side would only get two opportunities apiece to score, with all of those chances falling in the second half.

The first 45 minutes went by without much action as either team cautiously prodded the ball around the park and settled for long shots from outside the box.

Then, as the second half rolled around, four clear cut chances would present themselves.

The first opportunity would fall on the 50 minute mark to Maclaren of The Football Sack.

He raced through on goal after being played in by Broich but Jamie Young was equal to him as he charged off his line and smothered the ball.

Maclaren would get another chance five minutes later with Broich again setting him up.

The striker was slipped into the box again by the German playmaker only to shoot straight at Young with the goal at his mercy.

With half an hour to play, at the other end it was Bozza’s team ruing their luck.

Harry Novillo whipped in an inch perfect cross to the feet of Bruno Fornaroli in the middle of the box but he was denied a simple goal as Ante Covic superbly pushed his strike away.

He wouldn’t mess up his second chance with ten minutes to left on the clock.

Fornaroli dribbled his way to the edge of the box at pace, played a one-two with Fabio Ferreira and curled it past Covic to take the lead.

Bozza did a little jig on the sideline and could celebrate after the whistle as well as that was how the game ended.

Neither side created much but it was Bozza’s team that converted one of the very few chances they had to take home all the points in a 1-0 victory.

Lochy McIvor
Brisbane Roar and Tottenham Hotspur supporter. Jesus would have played in the hole. Follow me at @lochymci

Group F Preview – Do the Matildas stand a chance?