Perth Glory coach Kenny Lowe is one of the longest reigning coaches in A-League history but as Perth loom in a familiar seventh position one wonders whether he’s deserved his five year tenure.

The squads Lowe has assembled while at the helm of Glory have been impressive in bringing in the likes of Diego Castro, Xavi Torres, Andy Keogh, Rhys Williams and Adam Taggart.

Results have not reflected the quality within these squads however with Perth failing to finish inside to top four in each of Lowe’s five years in charge.

Furthermore in examining a breakdown of the total points scored in each season since Lowe took over, it becomes clear the things are not well in the West. 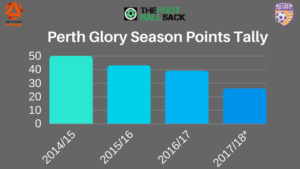 Renowned for his kind demeanour and sharp sense of humour, Lowe is often the star of the show with the media and there remains little doubt over his quality as a person.

The Englishman’s contribution to football both as a whole and in Australia is unquestioned through his playing career in England and coaching role within Australia’s National Training Centre (NCT) program.

“Football’s my life, it always has been. I’ve played, coached. From the moment I came to Perth I coached. I’d go out 7am and come back 10pm five days a week. You do 45 hours at work and another 45 at the NTC, it’s your love,” Lowe told The Sunday Times.

Always animated on the sidelines, it’s interesting that Lowe is perhaps not as tactically astute as some coaches and often delegates training drills to assistants, particularly former assistant Andrew Ord.

The decision for Sainsbury to relocate to the Central Coast instead of home town Perth is of particular interest as Lowe worked hands on with the young defender in their time together at the NTC.

“My very first professional coach Kenny Lowe at the institute, told me; ‘you are going to struggle when you go to trial at places because of your attitude,” Sainsbury told the Sydney Morning Herald.

Fast forward a few years and the laid-back defender has amassed a cool 33 Socceroos appearances including starting every game in the 2014 World Cup while enjoying spells in Holland, China and Italy, most notably with Inter Milan.

Lowe’s good nature looked to be taken advantage in moments of his reign when senior players began dictating the way Glory played during matches.

This was exemplified during a training session this season in which it appeared players weren’t following instructions with cameras catching an emotional Lowe screaming “I don’t f***ing deserve that” and “I am a f***ing decent bloke”.

Last season there appeared to be a basic game plan while experienced players given somewhat of a free license to shape the way the team played, namely to attack at all costs.

Although this catapulted Perth into the finals they did so by conceding a whopping 53 goals, more than any other finals side in A-League history.

Kenny Lowe is a very likeable and well respected member of the West Australian football community and his appointment to the helm of Perth Glory was well deserved but in order for the club to progress a change of direction is needed.