Melbourne City’s Sofia Sakalis may just be the best role model an aspiring sportsperson can have.

Not only is she out there for South Melbourne, Melbourne City and the Young Matildas but she is also very committed to her studies.

Now in Year 11 Sakalis enters the most important years of her schooling, which would scare most in her position, but the 16-year old believes she has found the perfect balance to achieve her academic and football dreams.

“I go to a very academic school so it’s a bit different,” Sakalis said.

“I get to experience a different side off the field which I enjoy and its really good for me.

“It’s something I need to do but I really want to do well in both.” 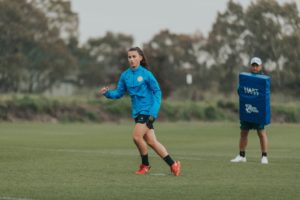 Travelling the world, representing her country and playing with some of the world’s best are some of the feats the midfielder has achieved all before her 17th birthday.

Sakalis’s started her journey at Melbourne City as a 13-year-old in the train-on program before being offered a professional contract at 15.

Injuries to key players in the City squad afforded Sakalis the opportunity to make three appearances for the side off the bench which has motivated her to set her sights towards the 2023 FIFA Women’s World Cup.

“It was a great feeling and I was buzzing when I would come on,” Sakalis said.

“Surprisingly I never actually get nervous for soccer so I was pretty calm.

“It’d be amazing to be part of it considering Australia is bidding to host it.”

Sakalis was part of the Young Matildas squad which bullied their way past opponents in Lebanon to advance to the second round of qualification for the 2019 AFC U19 Women’s Championships.

Australia has participated seven times in the tournament with the nation’s highest place finish coming in 2006 when the team won Bronze.

But Sakalis is confident in the squad’s ability with many of the players in the squad having come up together.

“There’s a core group which has remained from the U16s, there have been changes but this core group has been around for some time,” Sakalis said.

“The first round of qualifiers we did really well and topped the group.

“Going from there the second round kicks off before the Asian Cup in October and hopefully I get picked.

“I’m still one of the younger ones so I want to keep getting selected in the squad and travelling for championships.”

Bankwest Stadium will host the launch of a brand-new era for the competition (how many times have we heard that?) on Sunday 27 December. It...
Read more
A-League

A club with the world at its feet constantly falling at the most important hurdle and allowing its identity to be dominated by failure...
Read more
A-League

On August 5, 2008 Melbourne Heart played their first competitive match in the A-League. Since then, the club has experienced significant transformation – including a...
Read more
A-League

Another disappointing for Melbourne City after so much promise. An early finals exit putting City fans out of their misery after a season fueled...
Read more
Love your football?
Subscribe to our weekly football wrap. During the season we'll send you all the week's football action straight to your inbox.