Free-scorers: a look back at Australian football’s best entertainers

We often hear that goals win matches, and defences win you championships. Well, parking the bus may be effective, but it can be boring.

Today, we take a journey through time to chart the most memorable free-scorers in the Australian top flight since the turn of the century.

This includes the tail-end of the National Soccer League as well as the A-League.

First off, you might be interested to know how many goals were enough to earn a team the right to call themselves the highest scoring team that season. For convenience, the top three are highlighted. 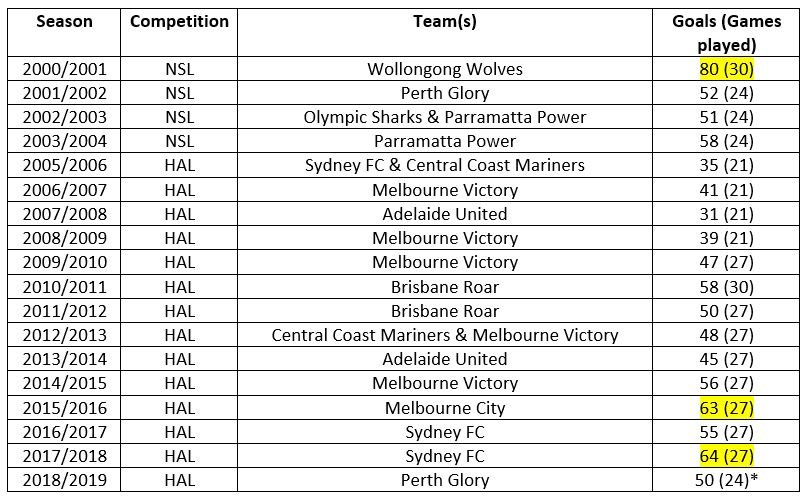 I don’t know what was in the water in Wollongong in 2000, but I need some.

Interestingly, they finished that season in second place, eight points behind South Melbourne, but went on to beat them 2-1 in the Grand Final. Perhaps goals do win you championships?

Melbourne Victory are also unsurprisingly prominent in this list. From Archie Thompson, Danny Allsopp, Marco Rojas, Besart Berisha, Kosta Barbarouses and Ola Toivonen, Melbourne Victory have been blessed with a powerful strike-force for the entirety of their existence in the A-League.

Once again, for your convenience, here’s the same data sorted by the total number of goals scored instead of the season. 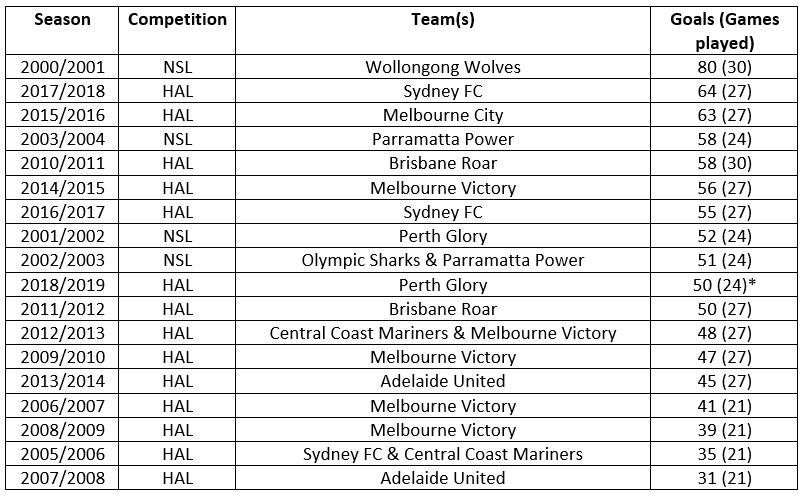 Sorting by goals scored, the early years of the A-League struggled to score the goals the other years have, but they also played less games. It also highlights just how dominant the Wolves were in front of goal that season, as no team even comes close both in the NSL during the 90s, and in the NSL and A-League in the years that follow.

It’s also interesting to note that Melbourne City sit third in this list, but finished the 2015/16 A-League season in fourth place. Perhaps defence does win you championships after all. But, goals do too, as we can see this season’s Perth Glory cracking 50 goals in 24 matches so far this season. How high up the list can they get before the season’s end?

As you can see, the Sydney Olympic Games really inspired the nation in 2000, as the top three scoring teams all happen to be from the 2000/2001 NSL season. Admittedly, they played an extra three games, but an extra three matches wouldn’t be enough for Sydney FC or Melbourne City to topple the Wollongong Wolves off the top. Beyond the NSL glory season of 2000/2001, recent seasons in the A-League fill out the top five.

It’s also interesting to note that there is an even split of NSL and A-League teams inside the top ten.

Debates will go on over which era was better: the NSL or the A-League. All I know is, they can both be bloody entertaining.

0
With another A-League season done and dusted, The Football Sack looks back at some of the best moments from the 2018/19 season. Perth 4-3 Wanderers, R13 When...
Read more
Central Coast Mariners

0
From Usain Bolt to ten goal thrillers; this A-League season had it all for the Central Coast Mariners. Mariners fans - you may want to...
Read more
Hyundai A-League

Johnny Warren Medallists: where are they now?

0
With another A-League season almost over,The Football Sack thought it would be fun to look back at previous winners of the Johnny Warren Medal...
Read more
Hyundai A-League

If A-League clubs were Marvel characters

0
With Avengers: Endgame out in cinemas now, we thought it would be fun to see which character in the Marvel Cinematic Universe (MCU) best...
Read more