A-League ticket prices could be driving away fans

The cost of A-League tickets for fans in comparison to other codes could be to blame for the competition’s low attendance numbers.

With football being announced as the number one sport for participation, the expectation is crowd numbers should be higher.

Football Federation Australia’s greatest challenge is to transform playing numbers into a larger fan base.

It begs the question as to whether A-League ticket prices are any different to rival codes in Australia and how it compares with other summer sports.

The Big Bash League prices are similar to the A-League.

The National Basketball League do not have set prices across the league like BBL. Instead, the price will depend on what game you attend.

This is the same with the A-League.

The length of each sport needs to be taken into consideration in terms of value for money, with football running for 90 minutes, differing from other codes.

For an adult ticket to go to the football, the cheapest ticket will set you back $20 plus handling fee and this price is similar for all the codes.

The A-League and NBL are behind the BBL in junior (4-16 years) ticket prices.

Cricket Australia sets a $5 maximum for BBL, A-League is $10 and the NBL varies in price but the cheapest ticket is $14. 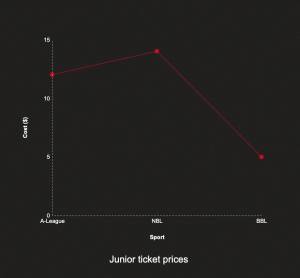 Junior attendance should be a focus to boost crowds in the A-League and it would be achieved through cheaper tickets for families.

However, the BBL also wins out on family ticket prices. 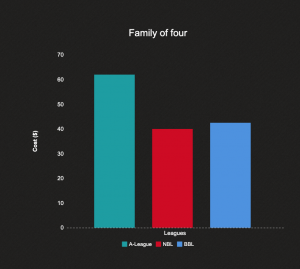 Tickets for football are considered too high by most, but they are not substantially different from the other summer sports.

Prices do depend on what the individual needs and this will dictate whether admission would be considered cheap or expensive.

Compared to other codes, prices cannot be the sole reason for stagnating attendances in the A-League but it is a contributor.

If the league wants to grow crowd numbers, a sure way is by lowering the price of family tickets to encourage more to watch.

0
Our mid-20s is often the age group for insane entrepreneurial ideas, not thinking their influence could have such an impact on a multitude of people...
Read more
Hyundai A-League

If A-League teams were Game of Thrones characters

0
We are all still hurt over the final season of Game of Thrones. Here at The Football Sack, we a have a few opinions on...
Read more
Football Book Reviews

Football Book Review: If I Started to Cry I Wouldn’t Stop

0
Have you ever wanted to delve into the stories of Australian football through the eyes of someone who has seen it all? If I Started...
Read more
Hyundai A-League

Should Sydney FC be given the Premiers Plate?

0
With COVID-19 putting a halt to all things we hold dear, the question around the footballing world is what should happen to league placings...
Read more