Which Australian has gained the most from the A-League?

Many Socceroos got their start in the A-League before becoming stalwarts of the national team.

Which former – or current – A-League regular has gained the most from the league in terms of Socceroos exposure?

This is what fans think at first glance.

Opinion poll: which Socceroo (former or current) do you think the A-League helped better their career the most?

To qualify for this list, players must have had zero caps internationally before their A-League debut.

Players will be ranked on appearances – mainly in crucial Socceroo fixtures – and also on individual awards won in the A-League.

Played semi-professionally before being called into the Central Coast Mariners’ squad in the 2006-07 season.

After 45 appearances in Australia, he was rewarded with a contract in Turkey before moving to Crystal Palace in the English Premier League.

Featuring as Socceroos captain in recent games – Ryan is on his way to becoming the most capped international at this rate.

Ryan won the Joe Marston Medal, goalkeeper of the year, and young footballer of the year two years running whilst at the Mariners.

He caused headaches for defenders in his brief spell at Adelaide United.

After 35 appearances in Australia, he signed with Borussia Mönchengladbach and now plays for Hertha Berlin in the Bundesliga.

After stints at both Western Sydney Wanderers and then Melbourne City, Mooy has established himself as the Socceroos playmaker.

A player brought through the National Soccer League and the A-League to become one of the highest-regarded Australian defenders in recent times.

He was a constant squad member during Ange Postecoglou’s first 18 months in charge.

The graph below analyses the number of international caps these players have and includes their appearances at major tournaments. 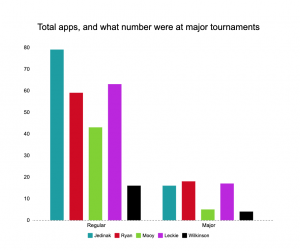 Results show Ryan has been used the most in bigger matches.

If you look at the number of individual awards won domestically by these players – it suggests Ryan did gain the most from the league. 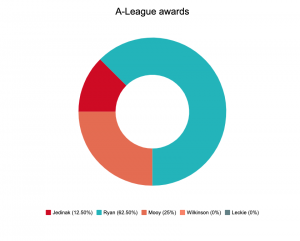 Ryan does have the A-League to thank the most from this list of players.

The competition helped him grow into a fully-fledged, top-class goalkeeper.

If A-League teams were Game of Thrones characters

Football Book Review: If I Started to Cry I Wouldn’t Stop

Should Sydney FC be given the Premiers Plate?

What went wrong at Western United?