Some football teams love playing in front of their home fans but crumble on away days. Just how important is playing at home for your A-League club?

Due to the pandemic, most games in foreign football leagues are taking place in front of empty stadiums. Some teams are struggling with this change – like Liverpool who have looked a different side since the removal of fans from Anfield. Many experts are now debating the influence that home fans have on results.

In Australia we have been lucky and spectators can still visit stadiums to support their team.

At The Football Sack, we thought this was the perfect time to assess how much your team loves playing in front of their fans. 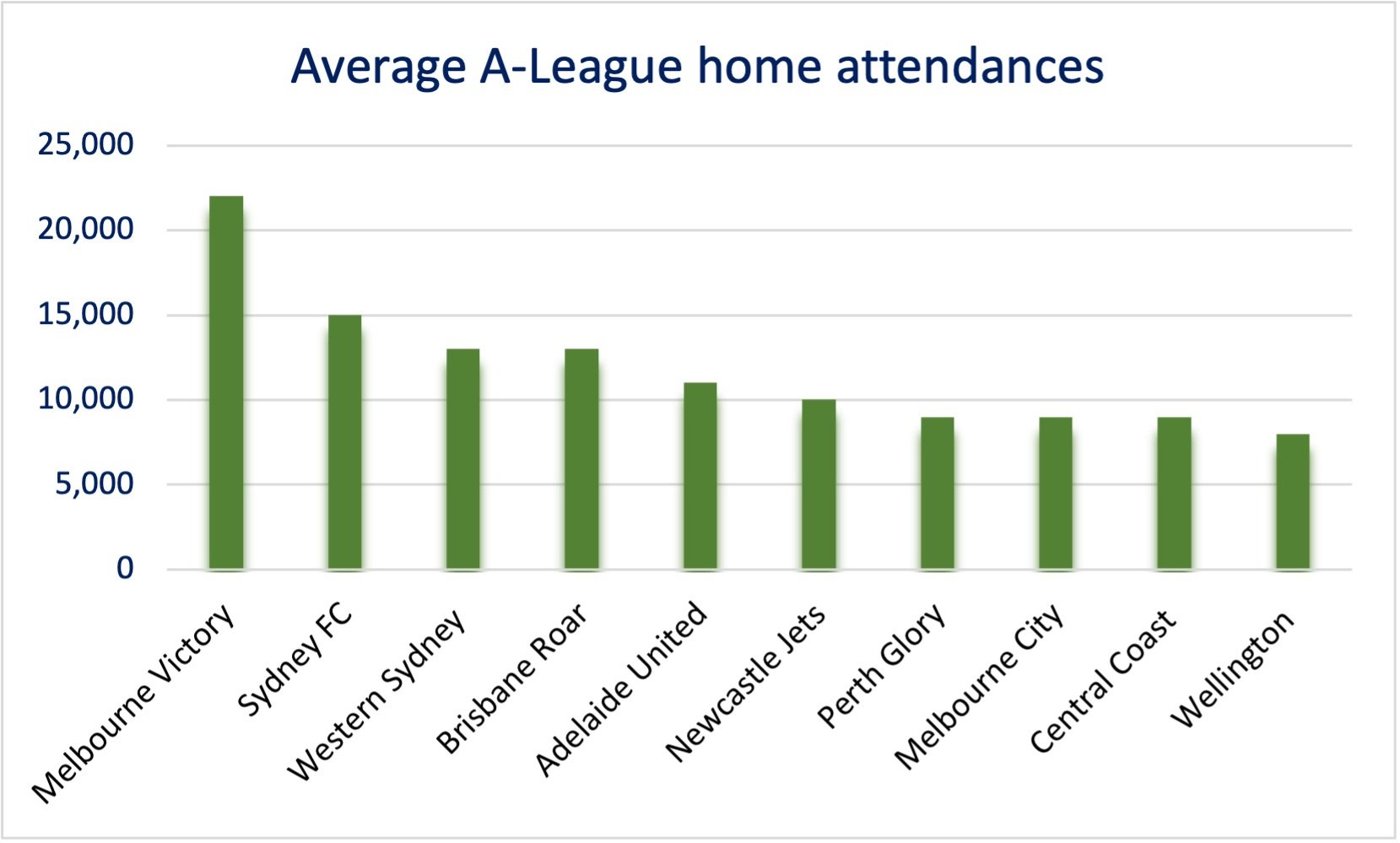 Supporters of the so called ‘bigger’ clubs like Melbourne Victory and Sydney FC have forever claimed they have the best fans in the league, based on their club’s home attendances.

In truth, determining which club has the best set of fans is a very difficult factor to measure, and basing it on average attendance is to over simplify.

We know that clubs who herald from major cities will always have more fans than clubs based in regional towns. But how much does your team actually rely on playing at home for wins?

We compiled every club’s win percentage at home versus away. The difference in percentage between home wins and away wins was found. This revealed which clubs were consistent performers at home and away – and which clubs relied most on playing in front of their home fans for wins.

*Please note that every side on this list had to have played 100 games to be included. All stats are from ultimatealeague.com 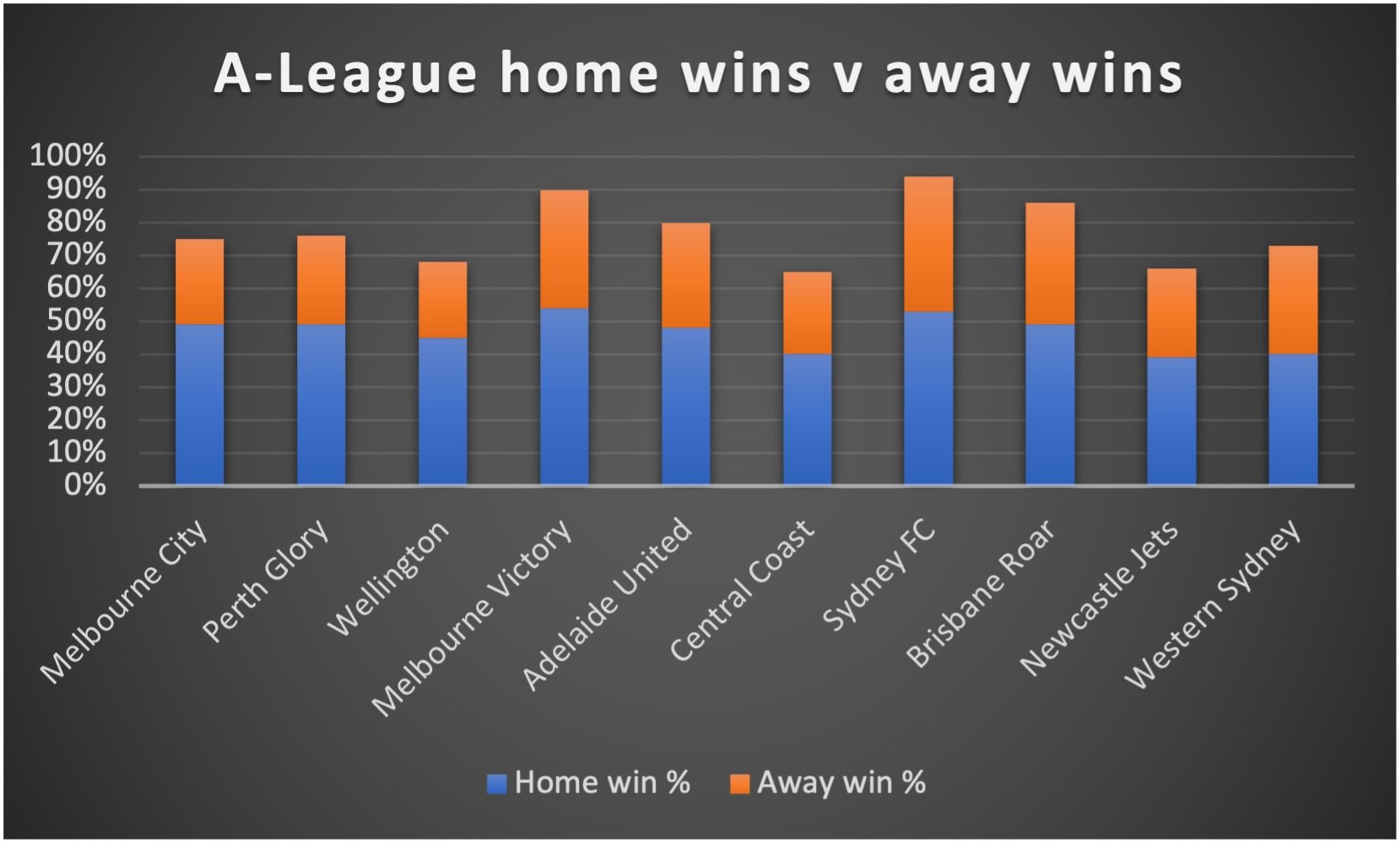 Every side on the list has won more matches at home that they have lost – and every side has also won more games at home than they have away. Surprise, surprise… We can definitively say that playing at home is a clear advantage in terms of results.

Are the most consistent side in A-League history in terms of wins away versus wins at home. Despite having one of the louder active supporter groups and also placing equal third for average home attendances (13,000) they do not rely on their home ground for results. They win only 7% more games at home (40%) than when they play away (33%).

Have the most wins in A-League history (194) and are also one of the more consistent performers at home versus away. They win 54% of matches at home, and 41% of away games. Since their move to Netstrata Jubilee Stadium they have won 70% of matches. This is the highest home ground win percentage on this list by a mile. Confirmed fortress.

Adelaide and Central Coast are fairly similar in terms of their consistency at home versus away. Adelaide wins 16% more games at home than away, while the Mariners are at 15% for the same measure.

Have the highest home attendance by a long way, so naturally they love playing at home – where they win 54% of the time. Away from home they win 36% of the time making them quite inconsistent in terms of wins at home versus away. They rank 4th on this list.

Like Perth, Wellington have to do more travelling than most of the competition and their high ranking makes sense. They have won 45% of their games at home. Away from the ‘cake tin’ they struggle, winning 23% of games.

They keep telling us how much travel they have to do season after season, so it should come as no surprise that they rank high on this list. Perth have won 49% of their games at home and just 27% of games away from home.

Hate travelling. They rank first in the difference between home wins (49%) and away wins (26%). Despite substantial investment from City Football Group, Melbourne City have failed to win a major trophy. Their inability to win games away from home may be a reason for this. They are the most inconsistent A-League performer at home versus away. Maybe AAMI Park is a fortress after all. 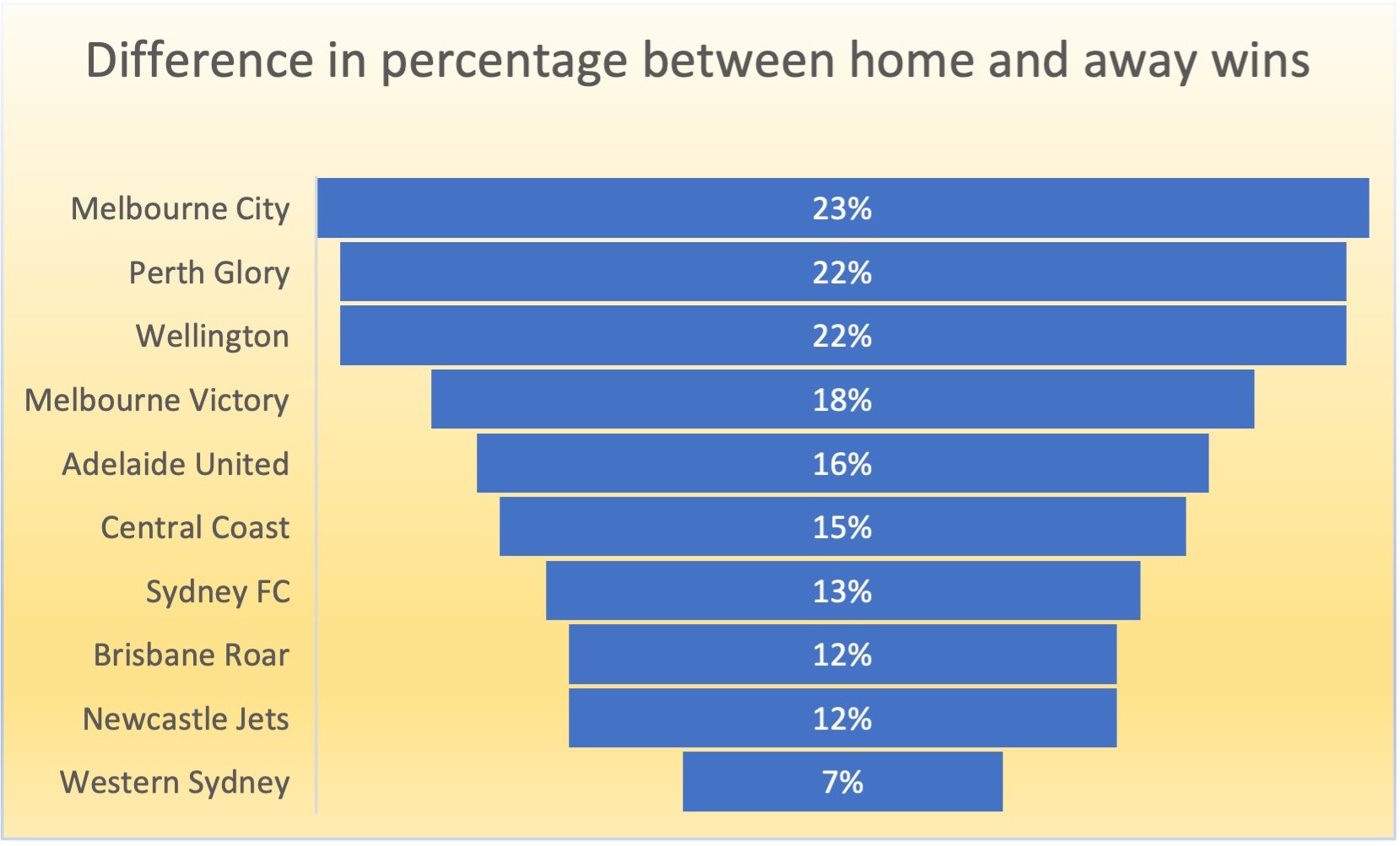 Sydney FC manager Steve Corica has admitted his side is “gutted,” after conceding a last-minute goal against Melbourne City in the side's 1-1 draw...
Read more
Melbourne Victory W-League

Richard Garcia says referees have a conflict of interest

Perth Glory head coach Richard Garcia has questioned the integrity of the A-League after a series of refereeing decisions went against his team in...
Read more
Love your football?
Subscribe to our weekly football wrap. During the season we'll send you all the week's football action straight to your inbox.