When measuring the success of a sports club, titles tend to be the first point of reference – but what about winning on a consistent basis?

Of course, the ability to win games week-to-week is not quite as prestigious as hoisting a trophy at season’s end, however it is still vital to maintaining club morale and consistently getting fans through the gate.

So, you ask, which A-League clubs – both current and former – are the best at picking up points in the games put in front of them? We’ve got you covered.

The Football Sack has compiled the all-time, points per game A-League ladder to rank each club’s ability to accumulate competition points in regular season games, all the way from the New Zealand Knights to Macarthur FC. This was done simply by taking each club’s all-time competition points total and dividing by the number of A-League matches they have contested throughout time.

The results might surprise you, with a handful of both defunct and newly introduced clubs ranking higher than some of the league’s established, Championship-winning sides.

One of the A-League’s inaugural clubs, very little went their way in their two seasons of existence. They finished at the bottom of the league in each season, losing 29 of 42 games contested and churning through four different coaches.

It comes as no surprise that they had their license revoked and total the lowest average PPG to this day.

Not even the signing of Robbie Fowler for the club’s inaugural season could really get the things going for the North Queensland Fury, who won just ten games over the course of two seasons at the top.

Financial difficulties were the final nail in the club’s A-League coffin, before they returned to NPL Queensland and then completely dissolved in 2018.

They have a Championship and two Premier’s Plates to their name, but even that is not enough to prevent Central Coast Mariners from having the lowest PPG of all current A-League clubs.

A lot of that comes down to their awful run of form over the past six seasons, during which they finished last on four occasions.

Another perennial struggler, it comes as no surprise the Newcastle Jets rank low.

The Jets had a wealth of early success, highlighted by the 2008 Championship, but the past decade has been a totally different story, having reached the finals just once.

Wellington Phoenix have been fairly successful in the A-League, reaching the finals on six of a possible thirteen occasions.

Although they have never really managed to break into the upper echelons of the league, the Nix have done a fair job of overcoming their geographic barrier to record a better all-time PPG than two Championship-winning clubs.

Although, it is not that much of a surprise when you remember that they reached the finals in each of their first two seasons before their epic demise in 2011/12. Fair play, Clive Palmer.

Perth Glory have had plenty of success throughout their history – just not in the A-League, really.

After finishing on top of the National Soccer League on three occasions, Perth have just the one Premier’s Plate to show for their fifteen full seasons in the A-League, and subsequently have a lowly PPG.

In their stunning pair of first two A-League seasons, the Western Sydney Wanderers registered a stunning PPG of 1.981 with 34 wins from 54 matches, as they looked set to conquer Australian football for years to come.

But having now been absent from the finals for three straight years, the Red & Black have slid all the way down to eighth place on the PPG table.

This is an interesting one. It’s the middle-of-the-road PPG that you would expect, but the records from the club’s Melbourne City and Melbourne Heart days contrast starkly.

As the Heart, the club recorded a PPG of just 1.126, which would put them 14th on this list. But as City alone, their PPG skyrockets to 1.130, which would see them rank fourth. With that, it is hard to argue the relative success of the City Group takeover.

A club that has found a way to be consistently competitive, it is no surprise to see Adelaide United with one of the league’s higher PPGs.

The Reds know how to get the job done through the regular season, having qualified for the A-League finals on 10 of a possible 14 occasions.

Of course, Western United have not been around very long, but they have certainly made a good early impression.

This season has gotten off to a bumpy start, but this top five finish is testament to a strong, inaugural A-League campaign in 2019/20.

Brisbane Roar have been quiet for a few years now, but that certainly is not enough to undo the good work of their historic 35-match unbeaten run from the Ange Postecoglou days.

In fact, if you were to remove those games from their all-time record, their PPG slides down and out of the top five.

Finally, a little something for Melbourne Victory fans to celebrate this season.

With a PPG of 1.541, the Victory are the first team on this list to average greater than a draw in each of their matches throughout history. Enjoy it while it lasts, Victory fans.

Of course, you take this one with a pinch of salt, but the numbers don’t lie.

Macarthur have had quite the start to life in the A-League, with four wins and two draws from their first nine games. It is very early days, but right now the Bulls hold the second greatest PPG of all time, and I’m sure their fans will take it.

With a record number of A-League Premierships to their name, Sydney FC have been the most dominant team in A-League history by some distance. As such, they hold a healthy lead at the top of the competition’s all-time PPG ladder, and it will likely take some time before they are chased down. 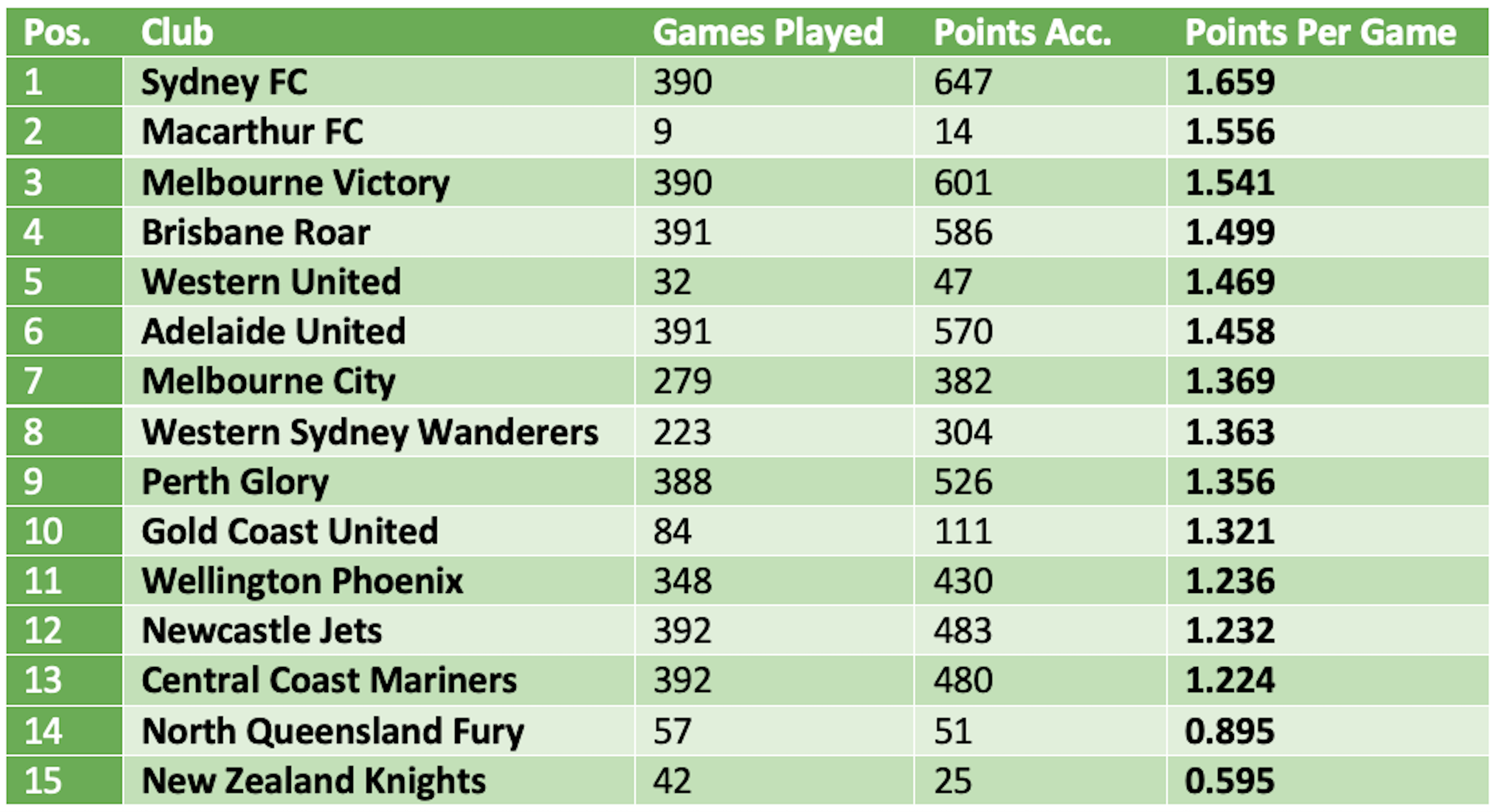 As we enter the back end of the 2020/21 A-League season, The Football Sack reviews the performance so far of the Western Sydney Wanderers.   Semester...
Read more
A-League

‘Pink Day’ has become a staple of Central Coast Mariners tradition over the past decade. Once a season the club rallies in support of breast...
Read more
Western Sydney Wanderers W-League

After a long wait, Western Sydney Wanderers striker Bryleeh Henry scored her first two W-League goals last week – and if she has it...
Read more
Love your football?
Subscribe to our weekly football wrap. During the season we'll send you all the week's football action straight to your inbox.