After a long wait, Western Sydney Wanderers striker Bryleeh Henry scored her first two W-League goals last week – and if she has it her way, they will be the first of many.

One of the Matildas most promising prospects, 17-year old Henry had a rough start to life in the W-League after failing to score in her first nine appearances since joining the Wanderers.

That all changed last Thursday against Melbourne City when she found the back of the net twice in the Wanderers crushing 4-0 win over the reigning champions.

Her first came in the 11th minute, applying a neat finish to Teigan Collister’s cross into the box. She then put the icing on her best W-League appearance to date when she tapped in another ball in from Collister.

Having had to wait ten games to find the back of the net, Henry was jubilant to finally be off the mark.

“It’s a massive relief,” she said.

“For me in my position it was particularly hard, and I think a lot of strikers could relate. As a striker it’s my job to score goals, so when I wasn’t doing that it felt like I wasn’t helping the team.

“After a while it starts to weigh on your mind. It got to a point where I was wondering if I was even going to sore at all this season.

“But then to finally get there and finally feel like I’m helping the team, it was a massive relief. Hopefully now I can keep them coming.”

Henry is still a teenager but already has a long list of achievements to her name. In addition to her newfound status as a W-League goal-scorer, she has already represented Australia with the Junior Matildas, participated in tours of Asia and the Pacific Islands, and earned selection in a Matildas Talent Identification Camp.

To say she has a big future in football would be an understatement.

Despite this, Henry remains level-headed and is not getting ahead of herself by any means. 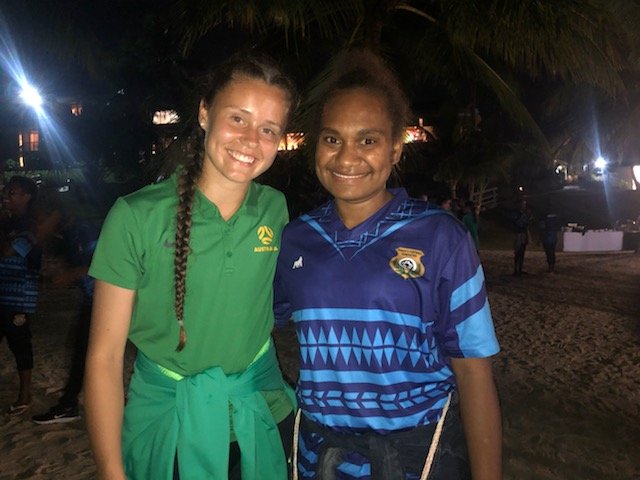 Amid a mass exodus of young Australian players to overseas leagues, Henry is comfortable in the W-League and is hoping to earn another Wanderers contract next season.

“Next year I can hopefully return to the Wanderers and stay in the W-League,” she said.

“It’s crazy that I’m playing for the Wanderers because I grew up here in Western Sydney watching the team, it’s my hometown club.

“The coaches are amazing and supportive, and so are the girls. Experienced players like Coops [Caitlin Cooper], Leena [Khamis] and Georgia Yeoman-Dale are all very nice and approachable which has made it a lot easier to settle in.

“I’m loving it at the Wanderers.”

While she hopes to remain with the Wanderers and complete her studies at Western Sydney University, where she is undertaking a Bachelor of Health and Exercise Science, she does have big ambitions.

Henry has already mapped out a detailed plan for her football career, including Matildas selection and a move abroad.

“Hopefully in the next three years I can go and play in Europe,” she said.

“That is definitely one of my long-term goals, to go and play there where most Matildas are now.

“Young Matildas qualifications are coming up this year for the 2022 under 20s World Cup, so hopefully I can be a part of that. The 2023 World Cup with the Matildas is definitely on my mind too.

With the Wanderers out of finals contention, Henry’s rookie W-League campaign will wrap up this Sunday when Western Sydney play their last game of the season away to Adelaide.

If there’s a Wil, there’s a way: Wilmering’s return from a 14-month injury