Socceroos vs USMNT: Who is better?

Many Australian football enthusiasts like to compare the quality of our national team to the United States. Unfortunately, the gap between the two sides is much bigger than it might seem at first.

Just like in Australia, football is not the most popular sport in their country.

The conditions for player development appear to be similar too, as the MLS operates under a salary cap just like the A-League.

Indeed, it was hard to separate the two national teams in terms of quality in the early 2010s.  FIFA World Rankings reflected that too.

However, a lot can change in more than 10 years, so how big is the gap between the two outfits now?

By looking at the US National Team’s star players, the gap with Australia is already becoming evident on the surface.

The five big American names are regulars on their club’s team sheet and play at the highest possible level.

Below is a breakdown of the top leagues which the US footballers play in.

It only incudes those called up to the national side within the last six months. Even so, the tally is truly impressive. 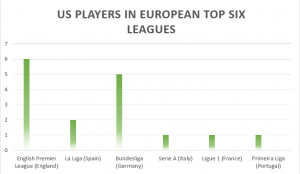 A whopping 16 US national team players currently compete in one of Europe’s top six leagues. Majority of them, apart from a handful, regularly appear for their clubs too.

There is a fundamental reason for it.

Indeed, all five of USA’s most notable players did not even begin their professional career in the country.

John Brooks and Sergino Dest were not even born in America to begin with.

This highlights the fundamental advantage of developing one’s career in Europe as opposed to elsewhere. European academies just operate at a level that can not be matched elsewhere and the numbers back it up. 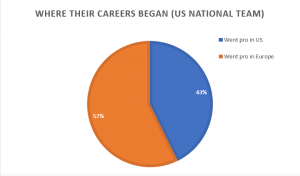 The figure above shows only five of the 16 Americans currently playing in Europe’s top six leagues began their careers in the United States.

Clearly, the quality of the national team has something to do with more footballers moving to Europe at a young age. Growing up there works a treat too.

Now let us see how the Socceroos compare.

When trying to think of current world-class Socceroos stars, it genuinenly becomes a waste of time.

Out of the current Soccceroos squad, only three players ply their trade in one of Europe’s top six leagues. 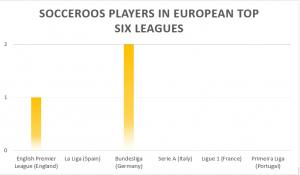 Admittedly, a number of Socceroos do play in European leagues elsewhere.

Centre-back Milos Degenek does so for Red Star in Serbia, while Trent Sainsbury plays for Kortrijk in Belgium.

Trio of Jackson Irvine, Tom Rogic and Marin Boyle play in Scotland too.

Sure, it is a very respectable level, but is it enough to make the Socceroos a force to be reckoned with in world football?

For the sake of an argument, the career origins of all Socceroos currently playing in any domestic European top-flight were looked at.

Only analysing those currently playing in a top six league would produce too small of a sample size – just three. 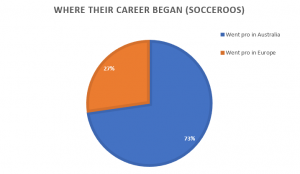 Of the 11 Socceroos currently playing in a European top-flight domestic league, eight began their careers in Australia.

This is a stark contrast to the US, with 16 players in a top six European league alone.

An even bigger point of discrepancy is in the number of players who began their career in Europe. While that figure is 57 per cent in the American camp, only 27 per cent of European-based Socceroos went down the same path.

Perhaps there is a correlation after all.

Ultimately, the quality of player development may be the main underlying cause behind the growing gap between the two countries. Exposure to European football from an early age seems to deliver a better final product and a greater proportion of US players have it.

The United States also appear to be superior at locating promising players with only a marginal connection to the country.

Besides Brooks and Dest, Fulham’s Antonee Robinson was not born in the US either.

Are there some hidden gems in Europe with an Australian connection, just like Boyle, which the Socceroos have failed to find?

Ultimately, the path to success lies through European youth development systems. Progressing via the A-League does not lead to the very top it seems.

Where are the players of Melbourne Victory’s 2014/15 A-League side?