The story of the Phoenix’s Sax-boy

What makes a home away from home? For Wellington Phoenix this season, it was a 17-year-old with a saxophone. The Nix may be returning to their true home, but the boy and his sax are in tow.

The man who owns said saxophone, and would later come to adopt the moniker of Sax-boy, was not a Wellington fan to begin with or primarily a saxophone player. Native ‘Gonger and economics student Tomas Phillips is a fanatic for his local NPL side Wollongong Wolves, and predominantly a clarinetist.

Still A-League football is football, and with the pandemic forcing Wellington to accept the Gong as home, it saw top tier footy come to the city, which Phillips eagerly lapped up.

The problem with basing the Phoenix in an entirely different country soon raised its ugly head. COVID-19 restrictions did not help, but the sheer lack of support the Nix did not have for home matches quickly became apparent. For Phillips, his moment of realisation came when head coach Ufuk Talay was booed following his yellow card by supposed fans.

Phillips’ fellow football fanatics in the WolfDen – The Wolves’ active support –  quickly came up with a plan to bring instruments to WIN Stadium in hopes of creating some atmosphere. The next home game he arrived with his saxophone.

“The Phoenix clearly weren’t going to do well if they were facing away crowds every single game,” said Phillips.

“I bought the saxophone at a garage sale. And I decided it would be fun to bring it to the games, it would be something different, something quirky.” 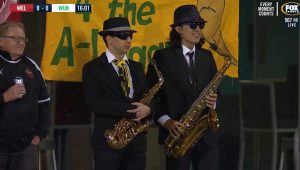 The saxophone’s debut initially raised the wrong kinds of attention, with Phillips having to debate stadium security as to whether his sax was allowed in.

The sax’s second run-out however was when its legend truly began. Phillips’ next trip to WIN saw a more relaxed security force as well as the arrival of the local Mexican populace to cheer on their countryman and captain, Ulises Dávila. A perfect storm.

“During the game where the Mexicans showed up, I got shown playing my saxophone on Fox sports,” Phillips said.

“From then on, I kept bringing it. It’s a lot easier to join in chants when there’s some music to go off.”

Phillips helped kick-start a creation of Phoenix-supporting culture in Wollongong with his saxophone. Local Israelis soon followed the Mexican lead to cheer on Tomer Hemed, and so aided by a saxophone, ethic supporters and Gongers alike began to get behind the Kiwis.

Sax-boy’s talents were put on display by Fox Sports, and his fame came in the most A-League way possible; he was retweeted by A-League Memes.

Bringing the Sax to football.
Calling on all @ALeague clubs,,,,,,I am available for Hire…@TheRealALM pic.twitter.com/ldl5QgwhDm

Phillips’ stock continued to soar as the official A-League account took a leaf out of A-League Memes book by also tweeting about Sax-boy.

Dear @WgtnPhoenixFC: May your new saxophone bring you years of… d'oh! 🎷

Then his saxophone playing abilities gave him the greatest gift of all, a trip to Wellington itself.

“When the Phoenix announced that they were going back to Wellington, I kind of jokingly said to a few Nix fans that if everyone on our group Facebook page chipped in $2 or $5 I could head over the ditch,” he said.

“And they actually did it. They told me to set up a GoFundMe, and they started donating money. Now I have enough to head over this Saturday.

“I couldn’t believe it. I had never met most of these people, and here they are, donating me money, saying ‘thank you for supporting the team whilst it was in Wollongong’, telling me they were going to buy me beers,* and just sending lots of positive messages.

“It’s a testament to the football community. There’s a few bad eggs, but on the whole, it’s just lots of nice people. It’s going to be good to meet everyone and thank them in person.”

However, the Phoenix are a secondary love. Phillips is well and truly a Wolves fan, for better or for worse, but when asked who he would support in a hypothetical clash between Wellington and Wollongong, he said it would be hard to favour the Wolves.

For one night only, on Saturday, that will all be put aside as Wellington gives its favourite saxophonist a night he will never forget.

*Tomas is 17. Buying him beer, or any alcohol, is illegal under New Zealand law. Therefore, please do not buy him beer or other alcohol.

Sit back and enjoy Phoenix fans; you’ve earned it