Middleton ready to cement her spot in Canberra’s starting side

One of the most important attributes for a player in the eyes of many football coaches is versatility, and Canberra United newcomer Chloe Middleton has that in bucketloads.

Whether she needs to slot into left-back one week, or striker the next, it’s no problem for the young gun.

Players like Chloe are crucial for a squad looking to win a title, and that is the goal for Canberra this season.

Equipped with her iconic headband and bow combination, Middleton has switched red for green this year, and is ready to make her mark on the A-League Women’s competition.

After a two-year spell with Western Sydney Wanderers, where she struggled to break into the regular starting squad, the young midfielder has opted to head to the nation’s capital in search for a new challenge.

“I just want to grow as a footballer and just learn new things to become better in my own game. I think that Canberra can help me do that,” said Middleton.

After years of success for her WNPL team Illawarra Stingrays, it was the red and black of Wanderland who handed Middleton her first A-League Women’s opportunity. Despite the overall lack of game time, it is something which she is incredibly grateful for.

“They were amazing. They made me a better player and taught me how to read the game better,” she said.

Middleton only ended up starting five games in each of her two seasons at the club, with increased game time a major factor in her decision to leave.

She is fully aware that her first challenge is to break into the starting squad, with nine new signings this season all eying the same thing. 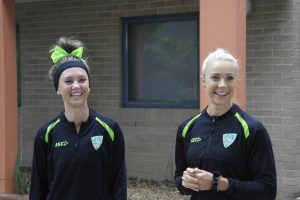 “It’s going to be a lot of hard work, so I just have to buckle down and train hard and try and earn my spot on this team,” she said.

Her versatility will likely help her cause, as she boasts that she is happy to play in any position that is not centre back. Her preferred position is however in the attacking third.

“Anywhere is really good for me. As long as I am helping the team that is all that matters really,” Middleton said.

That help will come in handy, as Middleton, along with the entire Canberra United team, are setting their sights firmly on going a few steps further than last season.

“(We are) always looking forward to the finals and hoping to win the championship as our main goal. Obviously our first focus is just on our first match, taking it one game at a time,” she said.

After being on the opposition last season, Middleton is keen to have the Canberra fans on her side for the upcoming season.

“The Canberra fans are amazing down here,” she said. “They are quite intimidating and they’re loud and they get behind their players, so I’m really looking forward to being a part of that.”

Canberra and Middleton will kick off their season on December 3 at home against Melbourne City.

The journey from an ACL tear in China to Canberra United

Harry Souttar injury caps off a disappointing night for Socceroos