Three months ago when the Philippines Women’s national team were training daily in Orange County, the dream of making it to a World Cup drove them to continue growing and improving as a squad.

Fast forward to Sunday night and that same team has done exactly that, when off the back of Olivia McDaniel’s penalty heroics they booked themselves a place in the AFC Asian Cup semi-finals and the 2023 World Cup in Australia and New Zealand.

Whilst there were numerous stand-out performances throughout the evening from the likes of Sarina Bolden, Katrina Guillou and Dominique Randle, it was ultimately McDaniel who was able to make the biggest moment her own. 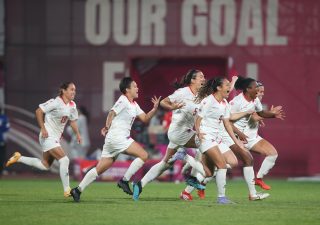 After conceding in the 82nd minute against a goal of the tournament contender from Zhuo Li-ping, the young keeper was called upon to win the most important penalty shootout in the country’s history.

To add to this pressure, Sunday’s game was just her fourth cap for the national team, something she hid exceptionally well throughout the shootout.

After not making a save from the first three penalties, the goalkeeper was given some assistance when Yi-Yun Hsu missed the fourth penalty to tie the match.

After captain Hali Long couldn’t convert her shot, the pressure was on McDaniel, with the equation simple. Make the save to keep the shootout alive, fail and they are out of the tournament. 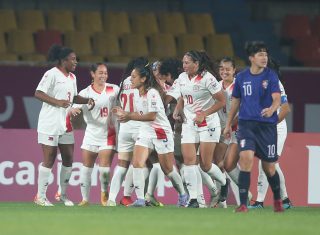 For McDaniel, the confidence was there despite only going the right way once in the previous four penalties.

“It’s make or break and you need to show up for your team right now,” she said.

“There was nothing going through my head apart from we are going to make this save, and it clearly worked out that way.”

To everyone’s shock after making the save, the young keeper would then go and pick up the ball to take the crucial fifth penalty, with the pressure to keep the shootout alive again resting soley on her shoulders.

For McDaniel she felt minimal pressure when taking the shot, even less than when she was in goals.

“To be honest I was more nervous to stop the penalty then take it,” she said.

“I’ve been hitting penalties forever and I get no nerves when I go up and take them. I know that it’s going to go in the back of the net.”

After blasting her penalty into the bottom-left corner, the US-based keeper made yet another stop on Chinese Taipei’s sixth penalty, before Sarina Bolden was able to emphatically seal the deal.

For coach Alen Stajcic, the penalty heroics were well earned after an impressive debut tournament from the shot-stopper, who has played all matches except for their group game against Australia.

“We have just played eight halves and for six of those we haven’t conceded. That’s a remarkable and phenomenal achievement and Olivia leads that line,” he said.

“To only have one cap under her belt before this tournament but to still show that composure and maturity. She was taking the fifth penalty, to have that amount of bravery in that moment and step up for the team, an unbelievable performance.”

Whilst it was McDaniel who stood out, for Stajcic it was a team effort and one which his whole squad can be proud of contributing to.

“It’s an unbelievable achievement by the group and it’s a moment in history for the country,” he said.

“No-one can take that away from the group. The team is so proud of each other, and even more proud that we will inspire the next generation.”

When asked about whether he saw this outcome as a possibility when he first met the team in October 2021, the Australian was clear that he always knew that if they played well they were in with a good chance of succeeding.

“I wouldn’t have taken the job if I didn’t see the potential in the squad. Watching them in Jordan four years ago I knew that there was something there, a potential for an extremely inexperienced group, and one that hadn’t really competed at major tournaments,” he said.

“For them to progress so quickly I’m running out of superlatives to describe that amazing achievement.”

McDaniel, Stajcic and the entire squad will now head to their maiden World Cup in Australia next year, after turning the dream that they came up with together into reality.

Whilst coach Stajcic was ready to celebrate, he couldn’t help but think ahead to how they could compete against the best at next year’s event.

“I’m greedy and know how much further we have to improve to be competitive when we do get to the World Cup, but that is a discussion for another day,” he said.

The Philippines now come up against Korea Republic in the semi-finals with a spot in their maiden AFC Asian Cup final up for grabs.

Football book review: Be My Guest, Football Superstars in Australia