The players have to do their duty on the field, yet it is the coaches who will be under the spotlight come the day and before they can extract themselves from the dressing rooms they kindly talked to The Football Sack writer Nick Guoth. 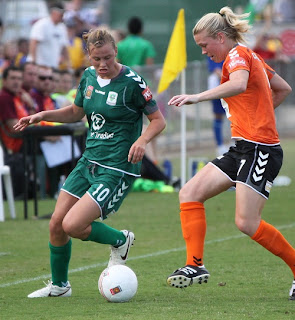 In this, Part Two of the Westfield W-League Grand Final preview, we hear from Alen Stajcic of Sydney FC and Jeff Hopkins of Brisbane Roar. Further, to add his own comments we also hear from the Matilda’s coach Tom Sermanni on his feelings about the game.

In Part One we saw that Sydney was the outright favourite to take out this year’s Grand Final. Sermanni was of the same opinion. “I believe Sydney just have the edge over Brisbane.”

Yet, who will be the main threats?

Sermanni puts forward that the trio of Kylie Ledbrook, Kyah Simon and Leena Khamis complement each other and their combination has been significant for Sydney’s wins. That appears to also be the general opinion of Hopkins.

“Simon and Khamis are in amazing form, both their goal scoring ability and in general play. We will have to keep account of them. Then you have players like Ledbrook who sparks off a lot of the better play, but the team is just full of quality.”

For Brisbane, Sermanni recognises Lisa DeVanna as “critical”. He also believes Lauren Colthorpe will need all her experience to control the midfield and Matilda’s centre-back Kim Carroll (pictured) will have to take responsibility to guide the defence against the attacking weapons of Sydney.

Stajcic also singles out deVanna as the “most potential attacking weapon” yet he is also worried about the midfield Brisbane has on offer. “Lana Harch and Tameka Butt were dangerous in the games against us as the playmakers.”

The previous game between the two sides saw Brisbane win 1-0 at the same venue for this Grand Final. I asked both coaches if there would be a psychological factor here. Obviously the answers were different.

“Nothing in history will affect this match,” Stajcic declared. “The teams are closely matched and whoever is better on the day will win.” Sermanni tends to agree. “There should be no psychological advantage as both teams have now won at the ground.”

For Brisbane, and Hopkins, the answer is definitely. “We know we can do it and have belief in ourselves. It gives us an extra dimension as we looked pretty convincing, yet we must be aware of their record during the season.”

So, speaking of record, Sydney had an easy win in the Semis and Brisbane struggled to get past the plucky Canberra United. With both teams eager to get on the pitch the question remains of the effects from last week’s games. How did they recover, any concerns?

“Everyone is looking forward and excited about the game,” was the general feeling of both coaches. And both teams are ready without any concerns. Unfortunately, though, Sydney skipper Heather Garriock will be out, but she will be on the field, in spirit.

Hopkins was very happy with the way his players have reacted to the extra-time and penalty shootout from last Saturday. “Going through that game it could drain players but we finished on a real high.

“This past week the players have been professional in how they looked after themselves. I have made sure we had light training sessions and got the players to enjoy themselves.”

Yet the task at hand is very important and at kickoff the lighter side will be left in the dressing room. Last season Sydney won and for Brisbane, they believe it is their turn. “We are not looking for revenge, but we believe we did not do ourselves justice and we have been building up for this all season.”

And while we saw that the other coaches were confident that the game would not go to extra time, both Stajcic and Hopkins are aware of the possibility. “It is something you have to prepare for.”

Yet this will also be a match that could swing on a decision, a mistake or hopefully a bit of magic. Who will do it? See you at Campbelltown on Saturday.

With another W-League season come and gone it feels like a perfect time for reflection and analysis. This past season has been hampered by the...
Read more
Melbourne Victory W-League