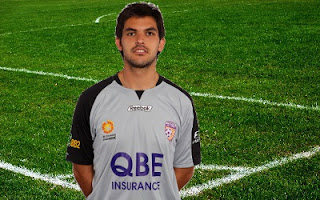 Following up on my article about the perils of playing football in Indonesia, Aleks Vrteski has kindly spoken to The Football Sack about what it is like, personally, to be part of the new revolution in Indonesian football.

Born in Karratha on the north west coast of Western Australia, Aleks has plyed his trade as a goalkeeper for a number of teams including Perth Glory on two stints and FK Pobeda in Macedonia. He has also represented Australia at U17 and U20 level and Macedonia at U21 level.

Now based in Central Java Aleks currently holds the gloves for Solo FC in the LPI (Indonesian Premier League). This league currently is not sanctioned by the PSSI (Indonesian FA) but that may change when the current Chairman is ousted.

Recently, according to the Indonesia Today News, FIFA has told current Chairman Nurdin Halid that he cannot stand for re-election. The elections are due very soon and many are anxiously awaiting to hear what unravels in the higher echelons of both Indonesian football and the Indonesian parliament.

Unfortunately there are also many Indonesians not holding their breath as there are a number of questions in relation to who will attend the next PSSI Congress where the new Chairman will be picked. It is said more than half of the delegates are boycotting the event.

Fortunately in Indonesia there is some sanity amongst the current football madness and as Aleks states,

“When I first heard about the LPI it really appealed to me because of the fact that if all goes the way to plan it could be one of the biggest revolutions in Asian football.”

While the ambitions of the League and its participants are high, it was fellow West Australian Robert Gaspar who tantalised Aleks into the decision.

“He’d been telling me about how things are looking on the up over here (Indonesia), so it was intriguing to me and I wanted to be part of it.”

Yet Alek’s decision to go to the LPI instead of the more secure S-League of Singapore or the Malay League was not just down to the guidance of Gaspar but also to the fact that Brendan Schwab was involved in the setting up of the LPI. Schwab, or the “Messiah” as Aleks calls him, is the Chief Executive of the Australian Professional Footballer’s Association and is strongly involved in Australian football. He has carried over his fervent drive to help footballers to the LPI.

Vrteski was one of the very first foreigners to sign up in the LPI and he has been the light for others to follow. David Micevski, Andrija Jukic and Goran Subara, all from Perth have come to Indonesia. Others to have ventured north include Josh Maguire and Srecko Mitrovic.

The camaraderie between the Australians is strong.

“You tend to find no matter where in the world you are an Aussie will always look after a fellow Aussie, it’s the only way we know.”

Even so, because of the game schedules, the players rely heavily on Facebook and mobile phones to communicate.

The weather in Indonesia is also stifling, and that means a lack of physical aggression on the field and more effort on skills. This provides some exciting games that pit together some of the better Indonesians with a selection of high quality foreigners.

Being one of those first foreigners to sign the LPI, Aleks has found everyone welcoming towards him. From the General Manager of the LPI, who had been a big factor in his settling in, to the CEO of Solo FC, life in the new country has been good.

Of course, there is more to life than just football.

“My Bahasa is slowly improving day by day. I can get by and also communicate with players. As for groceries not a problem most people can speak English over here.

“The food is brilliant and at the moment David (Micevski) and I are staying in a hotel so there is western cuisine as well so it’s like we haven’t left home.”

Aleks’ move to Indonesia also related to his position at Perth Glory where he was suffering from a lack of playing regular football. Now that Aleks is running out for Solo FC, he believes that he is improving with every game and maybe, with bigger football nations venturing to Indonesia, his stay at Solo FC could be a stepping stone to a more lucrative career.

The players have to do their duty on the field, yet it is the coaches who will be under the spotlight come the day...
Read more
Brisbane Roar W-League