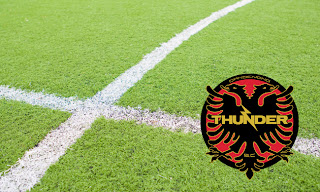 Dandenong Thunder have had a season to remember; claiming the VPL Minor Premiership weeks in advance before taking out the Dockerty Cup. Their aim is now to claim the first Victorian treble for 31 years with the next step a match against Oakleigh Cannons this Friday in the Victorian Premier League Major Semi-Final. Here we preview their chances against last season’s runner-up.

Last week:
Having claimed the Minor Premiership, Dandenong had the week off to nurse any injuries and to scout their opposition one last time. With Oakleigh playing the tough Green Gully last week, Dandenong’s fresh legs will be hoping to run rings around the Cannons.

This week:
A victory for the Thunder will see them straight through to their first Grand Final since 2009 and will confirm their status as Premiership favourites. A loss will not be the end of the world however, as the double chance will ensure they survive another week to play the winner of the Minor Semi-Final to try and snare the second Grand Final position.

Why Dandenong will beat Oakleigh:
Dandenong have been the best side in the Victorian Premier League this season and have arguably been the best side to contest a VPL season in recent memory. With strike power all over the pitch Dandy have no weak points and for that reason alone are hard to break down.

Why Dandenong won’t beat Oakleigh:
Luke Sherbon. The Welsh midfielder has been a key player for the Thunder this season, controlling play from the middle as well as equalling the club goal scoring record with 17. The problem is, he may not play. After succumbing to a hamstring injury in the Dockerty Cup Final, Sherbon has been on ice since, but it is still to be seen if he will take any further part in this season. With such a critical player potentially missing, the former UEFA Champions League players’ absence could be what stops Dandenong from completing the Triple Crown.

Player to watch:
Despite some impressive attacking players such as Canadian Nate Foster, Sean McIlroy and Liam Kearney, the player with the brightest future at the club is Anthony ‘Bryan’ Bran at centre back. A classic ‘beanpole’ defender, Bran was selected for the Young Socceroos as recently as last season and has been in form all year. Earmarked by former Oakleigh coach Arthur Papas as a future star, Bran has continued his development this season at his new club.

Prediction:
Matches between these two sides this year have been quite even, but with a Grand Final spot on the line except Dandenong to rise to the occasion and dominate from start to finish.

The sight of any NPL team sheet is usually enough to take the ordinary A-League fan on a nostalgic trip down memory lane. While many...
Read more
NPL Victoria

Heidelberg show their 2017 success was no fluke

Heidelberg United have not rested on their laurels to kick-start their 2018 National Premier League Victoria season, winning all four opening games in a...
Read more
A-League

South Melbourne coach Chris Taylor has acknowledged the timing of the FFA Cup semi-final once again disadvantaged the member federation club after his side's...
Read more

The Women’s World Cup always seems to bring out the best in the Australian football public. While great to see women’s football talked about...
Read more
Featured

Victoria has kept up its impressive recent record with four players on the park in Australia's win on Sunday as the U17 Matildas defeated...
Read more
Westfield W-League

Last year's champions still in with a chance. Image: Nick Guoth It's the ultimate round of W-League action coming up and every match has...
Read more
A-League

Having made the finals for three seasons out of their five season-long existence and gunning for their fourth straight appearance this time around, the...
Read more
Love your football?
Subscribe to our weekly football wrap. During the season we'll send you all the week's football action straight to your inbox.