It’s here! The 2018 World Cup in Russia kicks off on June 14th. The Socceroos will play in three group stage matches in the World Cup, against France (16th June), Denmark (21st June) and Peru (27th June).

With no free live sites planned for cities in Australia, there are still a bunch of places you can catch the football. We’ve picked out some of the better locations across the country where you can don the green & gold and support the Socceroos.

Here you can either watch the match on the big screen inside or, if the rain holds off, on the projector outside. Take in a quick game of pickup basketball beforehand at the pub’s own half-court.

These guys also have a big screen inside and out, and it’s smack bang in the middle of the inner west in Camperdown off Parramatta Rd. They’ve promised some great food, and it’s sure to be a goer.
More information…

This live site could either be a bust or the best place to watch the Socceroos in Sydney. It costs $20 to get in and promises an amazing atmosphere for up to 7000 people in the heart of Parramatta at Centenary Square. Get your tickets here or rock up at the door.

If you’re after something a bit comfier the Enmore Theatre will have the game playing for $11 per person. The beer is a bit expensive, but the acoustics are stunning and when the Aussies score first against France, it will be electric. Tickets and info here…

These guys are nuts about two things: Pizza that is ordered by length, and football. Located at Milton on Park Road, they’ve been showing matches since 1994. They’re already booked out for France (seating for 200), get in quick for the Denmark & Peru games.
More information…

The classic football venue in Brisbane. If you’re looking for a sure thing, get to their Riverside location and join the Socceroos active support.

This is where those of the Socceroos Active Support not heading to Russia will be rocking up in Perth. Aberdeen Hotel have renovated their space and rebranded it “The Game Sports Bar”, which is apt. Football is THE game.
More information…

It’s at the casino, what more do we need to tell you?
More information…

They’re advertising they’re showing the game so they must have got their license.
More information…

It has everything you need. More information…

Of course, the iconic venue is playing the Australia vs France game with coverage from 7pm. It’s not confirmed if they’ll have the remaining fixtures on, but it’s Melbourne, so it’ll probably be raining anyway. 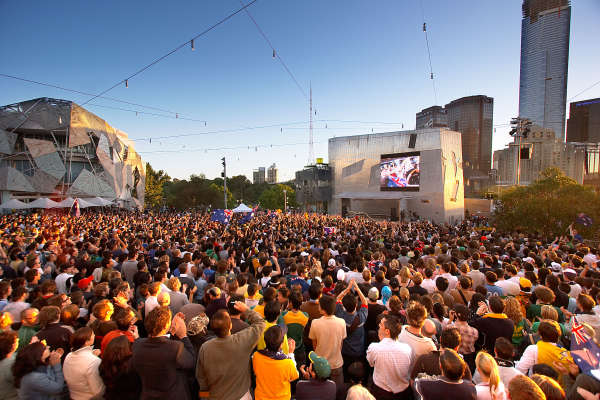 This is where those of the Socceroos Active Support not heading to Russia will be rocking up in Adelaide. For $23 you get a pizza and a tinnie, watch the game in Sportys Bar & Arena. More information…

The casino will be playing the Socceroos games in the Grandstand Bar. More information…

5 reasons not to watch the A-League this season

0
We're no schmucks. We haven't bought into the slick marketing for the 2018/19 football season. Just in case you were thinking of tuning in to...
Read more
Socceroos

0
Dust off your green & gold, it's time. Find a pub or a venue near you and watch Australia defeat France tonight at the...
Read more
Podcast

Podcast for Russia | Ep 1 – An Egyptian out of nowhere

0
The shark jumping obsession with Pokemon GO has reared it's ugly head in the A-League with the upcoming release of a Nintendo game that...
Read more