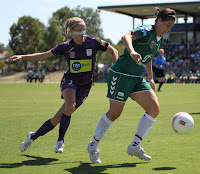 Canberra United secured their position in the Finals series with a 1-0 win over Perth Glory in and entertaining match at McKellar Park. For Perth it was the end of the line as defeat saw them finish fifth.

That single goal came from substitute Ashleigh Sykes who, at the far post, headed home an Emily van Egmond free-kick with only a few minutes left on the clock.

This was a game where both teams chose to play for the win meaning end to end action and numerous chances with more than fifty balls in the penalty areas.

Yet the match also had some controversy mid-way through the second half with referee Kiralee Gardener ruling that Kate Gill had fouled Canberra goalkeeper, Lydia Williams, when trying to push the ball over the line.

Perth had the best chance of the opening half, a long ball over the defence finding the speedy Sam Kerr. Her touch was poor, the ball easily running to Williams.

Canberra also had a couple of good chances, mostly generated down the right. A Caitlin Munoz cross went just behind Michelle Heyman and then an Ellyse Perry cross was completely missed by van Egmond before Leah Blayney sent her shot over.

At the other end, Gill headed down form a Collette McCallum cross but it fell easily for Williams, a mirror of most attempts by Perth. They just could not get purchase on their shots and Williams was never troubled.

Tine Cederkvist at the other end was challenged on more than one occasion. When she as beaten in the first half, her defenders came to her assistance. A corner from the left found Canberra captain Ellie Brush and her header was goal-bound except for Jaymee Gibbons at the near post heading away.

The second half was a mirror of the first, both teams pushing for the win. First it was Munoz, Cederkvist diving at her feet to squash any chance. Then for Perth Elissa D’Ovidio had a pair of shots, one deflected wide, the other rolling to Williams.

Yet, finally, a moment of unfortunate madness opened up Perth. With a ball going off to the left touchline, Tanya Oxtoby thought it had crossed the line and thus picked it up for a throw in. Gardener correctly ruled a handball and van Egmond’s spot kick was converted by Sykes.

Canberra could have doubled their lead only two minutes later. A corner from the right by Perry found the advancing Cian Maciejewski who, recovering form concussion last week, headed the ball off the top of the crossbar.

Canberra will now travel on Saturday to Ballymore to play a rested Brisbane. The winner will take on either Sydney or Melbourne in the Grand Final.

The players have to do their duty on the field, yet it is the coaches who will be under the spotlight come the day...
Read more